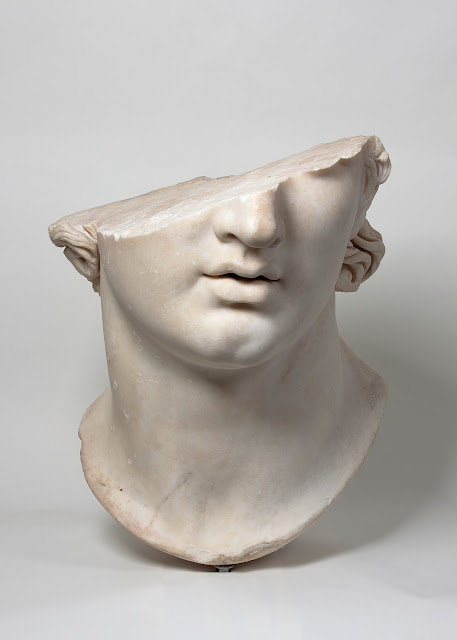 Pergamon and the Hellenistic Kingdoms of the Ancient World

The Metropolitan Museum of Art

There is an element of mystery to the huge, sadly mutilated marble head which is a highlight of the new exhibition, Pergamon and the Hellenistic Kingdoms of
the Ancient World at the Metropolitan Museum of Art.

What could have been the purpose of such a colossal portrait head? Measuring over twice the size of a human skull, its purpose is unclear. It was intended to be fixed in another setting - but where? And whose likeness did the portrait head represent?

There is no mystery about what this battered survivor of the ancient Greek world means for the twenty-first century. As we watch the cultural heritage of the world being vandalized and plundered, this work of art stands for what has been lost and also for what has been saved.

Civilization has survived, as Kenneth Clark memorably declared, by "the skin of our teeth."

Clark's 1969 Civilization television series documented the rise of art and culture in the West "after the fall."  What fell was not just the Roman Empire in 476 A.D. The cultural matrix of ancient Rome and its dominions was essentially Greek, a legacy of the Hellenistic kingdoms which flourished before the rise of Rome. Along with the pomp and power of the Pax Romana, the heritage of the Hellenistic era was largely lost during the centuries following the collapse of the Roman Empire.

What was lost is now found - or nearly so. The spectacular exhibit at the Metropolitan Museum, Pergamon and the Hellenistic Kingdoms of the Ancient World, provides a detailed overview of the Hellenistic age for the first in the United States. Both the achievements of the Hellenistic Greeks and the cultural transition to upstart Rome are brilliantly treated in the Met's exhibit.

Pergamon, located in present-day Turkey, was one of the Hellenistic kingdoms which rose to power after the death of Alexander the Great in 323 B.C. Founded in 282 B.C., Pergamon was ruled by the Attalid dynasty. Most of the rulers of Pergamon were named Attalus, adding to the difficulties of dating inscriptions by modern-day archaeologists.

Pergamon is one of the most exhaustively studied sites from ancient times. Its recovery is literally a "triumph of German engineering."

During the 1860's, Carl Humann, a German railroad engineer working in Turkey, noticed people in the town of Bergama digging up pieces of ancient statues. These fragments were burned to produce lime. Humann successfully petitioned Turkish leaders to stop the destruction.

On his own initiative, Humann undertook preliminary excavations and passed the reports to German museum authorities. Humann, though not a trained archaeologist, became so accomplished and maintained such a vital network of contacts in Turkey that he was nicknamed the "Viceroy of Asia Minor."

In 1878, a prolonged archaeological expedition under the leadership of Alexander Conze at Bergama recovered the lost grandeur of Hellenistic Pergamon. 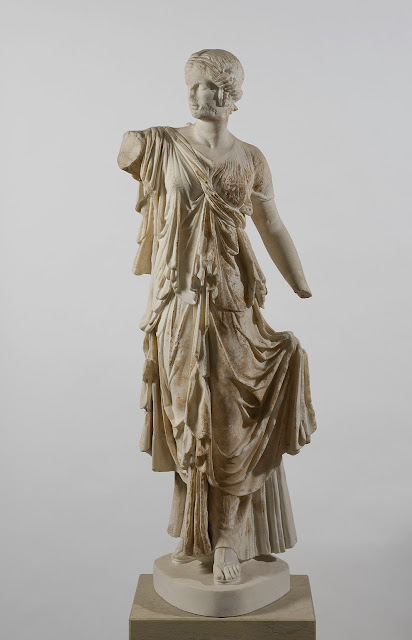 One of the early discoveries was this intriguing statue of dancer. Although dating to late in the Hellenistic era, the figure with its intricate skirt folds was deliberately created in the artistic style of the early city states of mainland Greece. This elegant dancer was intended to evoke the Hellenic spirit, a sense of Greek tradition that was the foundation of the Attalid dynasty and the imposing temples and palaces of Pergamon.

Much of what was excavated was taken back to Berlin, by special agreement with Turkey. This included the west side of the Great Altar of Pergamon which was reconstructed in the Pergamon Museum in Berlin. This great institution is currently being renovated, providing the opportunity to bring many of its treasures to the Metropolitan Museum of Art. 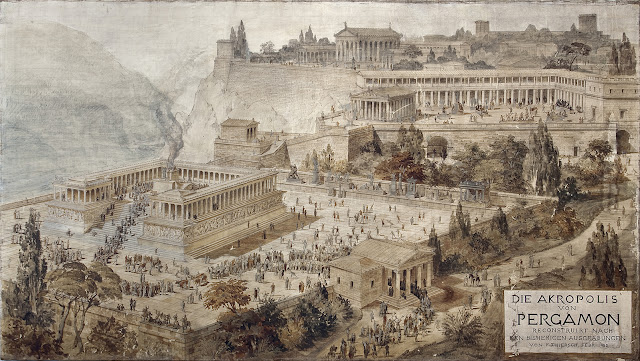 Of the many works of art brought from Berlin surely the most remarkable are the fragmentary marble head, discussed at the beginning of this review, and a towering statue of Athena, modeled after the cult figure of the Parthenon.  Both tell us much about the Hellenistic kingdom of Pergamon.

The shattered head is thought to have decorated the wall of the gymnasium of Pergamon. It is a type of art variously described as a tondo or imago clipeata meaning "portrait on a round shield." The colossal head jutting forward, with parted lips as if to speak, may be Apollo but is more likely to be an idealized portrait of Alexander.

Alexander's presence dominates the exhibit galleries of Pergamon and the Hellenistic Kingdoms of the Ancient World. 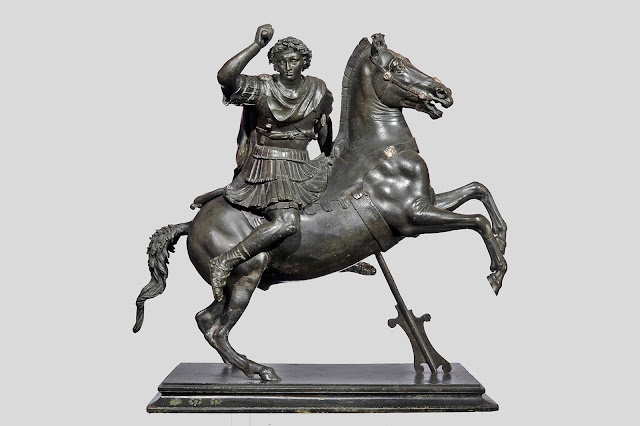 There are numerous portraits of Alexander, ranging from a lean-featured warrior to a sensitive, god-like figure. The Hellenistic rulers of Egypt kept a careful guard over the embalmed body of Alexander, so the monstrously large portrait head excavated in Pergamon is likely to have been created as chess move in the cultural "Cold War" waged between the Attalids of Pergamon and their rivals in Egypt.

The statue of Athena, smaller than the one in the Parthenon but still imposing, stood in the Library of Pergamon. The Attalids built a book collection second in size and importance to that of Alexandria in Egypt.

At some point, the flow of Egyptian papyrus for new volumes was halted, reputedly by order of Ptolemy V. The librarians at Pergamon began using cured sheep skins for their books. They were so successful that this form of paper became known as pergamēnē which eventually was translated into English as parchemin or parchment. 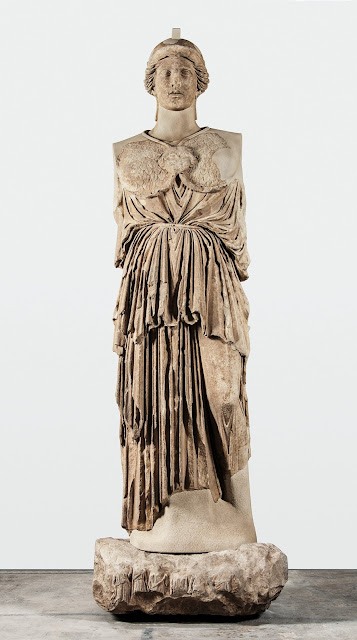 Worship of Athena took on additional meaning in Pergamon as one of its early rulers, Attalus I, assumed the role of the Athenians as the defender of Greece against the "barbarians." But instead of fighting Persian or other Asian enemies as the Athenians had done, Attalus I won a resounding victory in 241 B.C. over invading Celts. These raiders had crossed from Europe over the Hellespont into Asia Minor to attack Pergamon and other Greek states.

The Great Altar at Pergamon was built to celebrate this victory of Attalus I. However, there is very little that is straightforward about the Hellenistic period. In battling against the Celts, Attalus was really fighting against the Hellenistic Greek dynasty in Syria, the Seleucids. These "civilized" rivals paid the "savage" Celts to attack Pergamon several times following the initial victory of Attalus in 241 B.C.

Just as the one-time allies, Athens and Sparta, had torn each other to pieces in the fifth century B.C., so later did the Hellenistic kingdoms.The Greeks had a cyclical view of history and no wonder! For all their brilliance, they kept fighting and slaughtering each other - over and over again.

Much of the art on display in the Metropolitan exhibit had a propaganda value intended to enhance the status of Hellenistic rulers like Attalus I. Other works testify to the efforts of the Hellenistic monarchies to provide their citizens with recreation and luxuries in order to distract their minds from the endless wars. 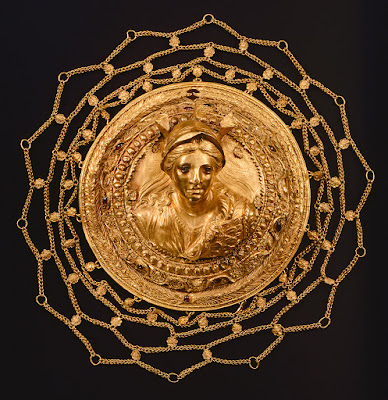 The "good life" in Hellenistic Greece included items of magnificent adornment like this golden hairnet, graced with a tondo image of Athena.

Theater flourished during the Hellenistic age, chiefly through the "New Comedy" of Menander (342/41 – c. 290 B.C.). The exhibition includes a sensitive marble portrait of Menander from the Dumbarton Oaks Museum collection, as well as this outstanding mosaic of a scene from one of Menander's comedies, likely Theophoroumene (The Possessed Girl). 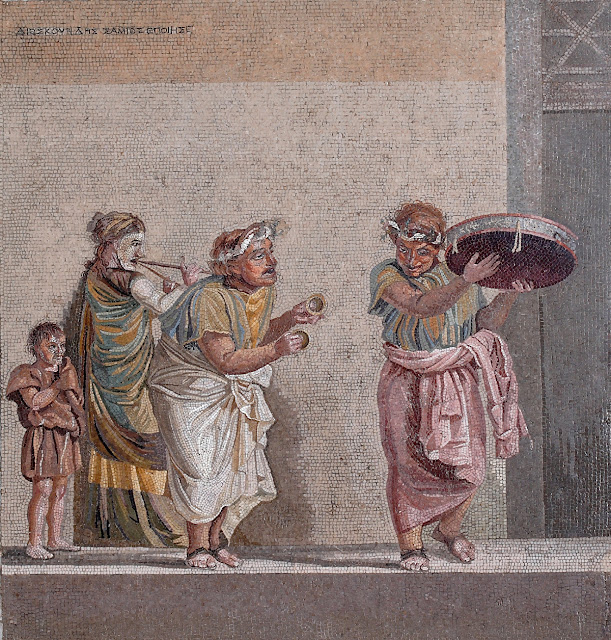 Menander wrote over one hundred plays, many of them bawdy comedies. He was so famous in antiquity that many lines in his plays became popular proverbs. Even St. Paul in 1 Corinthians 15:33 quoted Menander, "Bad company corrupts good character."

Menander, however, is one of the most notable examples of civilization surviving by the "skin of our teeth." Only a few scattered lines from his plays survived until twentieth century discoveries. Papyrus texts, used to line Egyptian mummy cases during the era of the Roman Empire, were found, containing substantial quotations from Menander's plays. Even with these fortunate finds, however, only one (nearly) complete comedy by Menander has been discovered.

The Metropolitan Museum exhibit also displays numerous examples of the Hellenistic taste for sensuality, a theme that was usually expressed with reference to mythology. By the end of the Hellenistic era, many people had begun to question the nature of the gods. But the traditional pantheon of Olympus continued to yield images for popular art. The Borghese Krater, an imposing work in the Louvre collection, beautifully expresses the desire for Arcadian ease and sexual gratification. Sentiments like this are often found in societies sick of war and rumors of war. Here Dionysian figures delight in each other's company on a marble vase made around the time that Octavian Caesar's battle fleet crushed the forces of Antony and Cleopatra at the Battle of Actium, 31 B.C.

The ill-stared alliance and immortal love-match of Antony and Cleopatra brought the Hellenistic era to an unforgettable close. There are several works of art in the Metropolitan exhibit relating to this well-known episode. One of these is a multi-panel bas relief of the Battle of Actium from a private collection in Spain that I had never seen before.

It is a very familiar piece of art, however, which seems to me to be the best evocation of the Hellenistic Age and the passing of its torch to Rome - and to us in modern times.

This is the beautiful Vienna Cameo. Unlike the plays of Menander, this carved-jewel from Ptolemaic Egypt was never lost. It was stolen in 1574, from the cover of a reliquary containing the "bones" of the Three Kings. Some years later, the cameo was purchased by the ruler of Mantua and then found its way to the art collection of the Hapsburg Empire in Vienna. 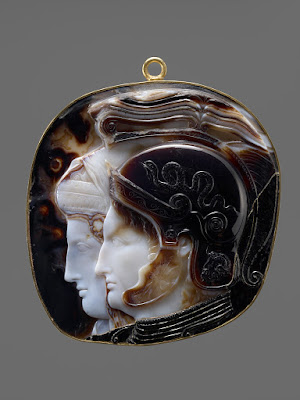 The cameo dates from around 278 B.C., early in the Hellenistic era. The elegant couple are King Ptolemy II Philadelphos and Queen Arsinoe II, his sister and his wife! But with the Roman-style helmet worn by Ptolemy and the forceful gaze of Arsinoe, I cannot help but see these two as a fitting stand-in for Antony and Cleopatra.

More to the point, the Vienna Cameo testifies to the resilience of great art and the spirit that motivates its creation. It says a lot that people in the Middle Ages prized the cameo enough to place it on a relic container and that a Renaissance collector would pay a healthy sum to add it to his "cabinet of curiosities."

Now, the Vienna Cameo graces an outstanding art exhibition filled with works that have survived centuries of war, looting and destruction. On view at the Met, these treasures tell of a lost civilization whose remnant has survived by "the skin of our teeth."

Among its many accomplishments, Pergamon and the Hellenistic Kingdoms of
the Ancient World inspires the hope that our civilization, heir to the Hellenistic world, will endure too.