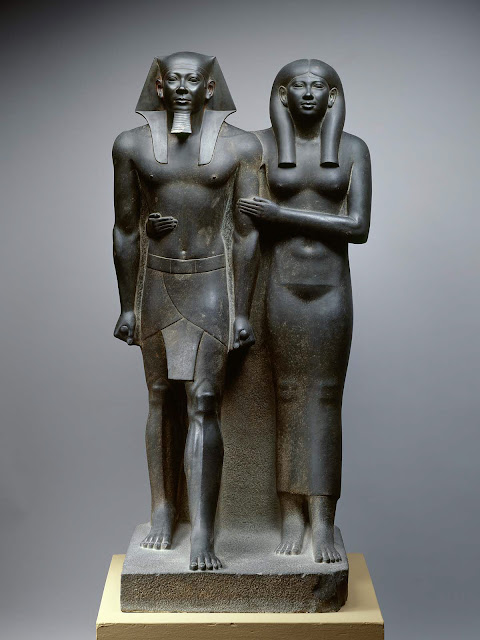 Egypt has been known as the "gift of the Nile" ever since Herodotus described it so memorably around the year 450 BC.  Creative, industrious and disciplined, the Egyptians of antiquity shared the gifts of the Nile with the peoples and cultures around them and with us today  - many, many centuries later. 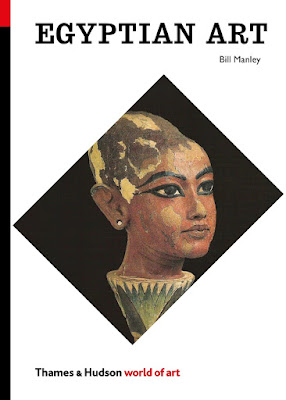 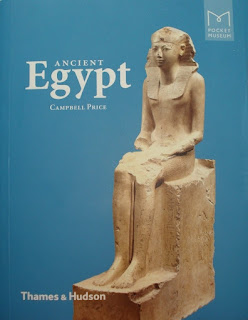 Both books investigate the objects of everyday life in Egypt, as well as what we would consider as "fine art." That distinction did not exist in ancient Egypt. Indeed, the modern idea of art as an aesthetic ideal, divorced from the dictates of daily reality and the hope of eternal life, would have been difficult for the Egyptians to grasp.

A significant factor why the Egyptians did not treat art as a separate entity is that their creative lives were inseparably  bound to the toil of human existence and their overwhelming concern for the destiny of the human soul. 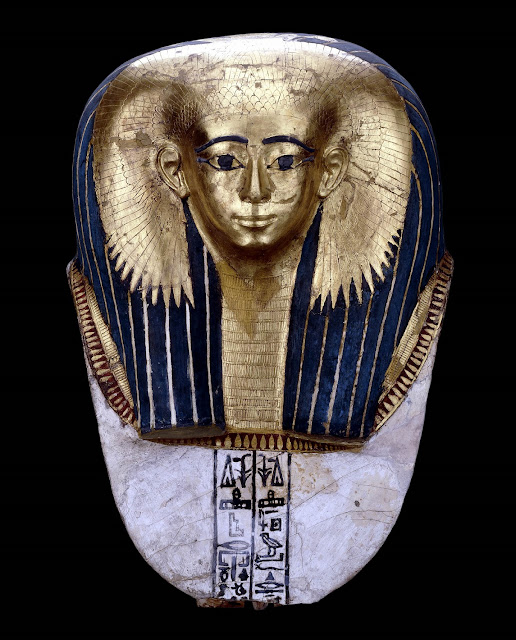 Nothing came easily to the Egyptians, despite the talent and energy they displayed throughout ancient times.The full quote from Herodotus - and one that is rarely given in full - is worth considering.

Egypt, Herodotus declared is "a land won by the Egyptians and given them by the Nile."

The Egyptians "won" by fighting a never-ending battle against the most formidable opponent imaginable: the "red land." This was the desert that surrounded the fertile "black land" of the Nile Valley on both sides. The desert threatened Egypt with desolation should the Akhet, the annual overflow of silt-bearing river water between June and September, fail to come in sufficient volume.

If you want to gain insight into the struggle for survival of the Egyptians, a good place to start is study of two remarkable statues from the Old Kingdom. These sculptures are analyzed in Manley's Egyptian Art. The subjects of both statues were real men, high-ranking officials yet neither a pharaoh. Their portraits bring us closer to the reality of Egyptian life than the celebrated golden mask of Tutankhamun. 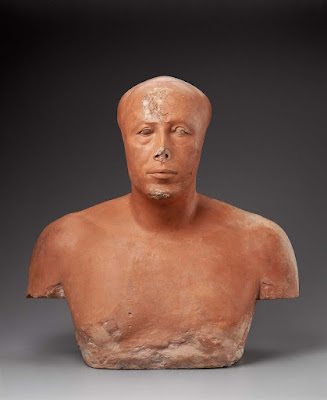 The first is Vizier Ankhhaf, an overseer of the construction of the Great Pyramid and the Great Sphinx, 2589–2566 BC. Ankhhaf's portrait "bust" was created in painted limestone and probably had arms which did not survive. The natural effect is quite stunning, very different from the impersonal or stylized portraits of many pharaohs. Ankhhaf has the weary, if determined, expression of a battle-tested commander.

The second statue is of a less-exalted figure, a regional supervisor of farm labor named Meryrahashtef. A  vigorous, self-confident man of action, Meryrahashtef bears one of the most expressive faces in all of ancient art. 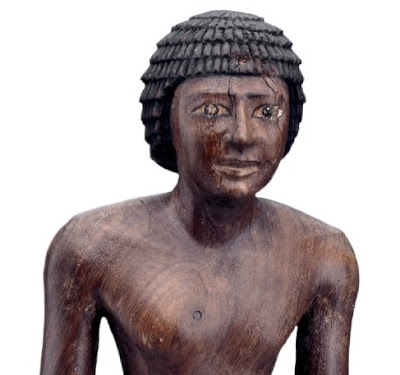 Amazingly, Meryrahashtef is shown without a kilt or loin cloth. Male nudity was never part of the Egyptian art canon, except for propaganda depictions of war captives.

Meryrahashtef's statue, carved from rare ebony, would never have been displayed in such a manner in his tomb chapel. Rather, it would have been ritually garbed for ceremonies honoring his "immortal presence." 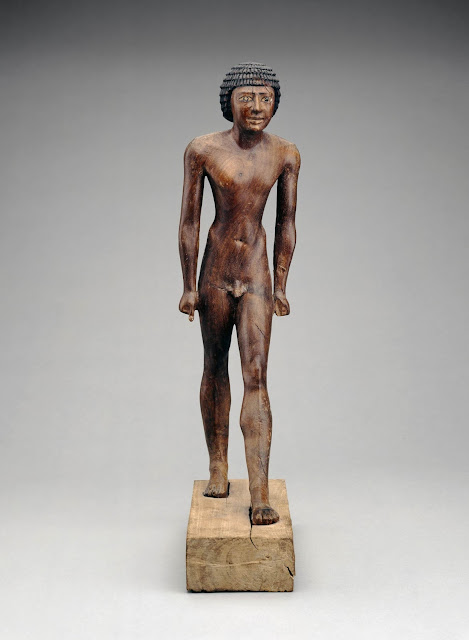 Meryrahashtef certainly deserved to be honored. He had a tough job, getting the harvest collected during years of drought. Living three centuries after Ankhhaf, he had to confront Egypt's worst nightmare.

Around 2200 BC, the yearly inundation dramatically diminished. The overflow from the Nile proved to be "too little, too late." Crop yields declined and the population of Egypt faced starvation. The once centralized sovereignty of the Old Kingdom unraveled. Anarchy prevailed.

As if to confirm the collapse of authority at the end of the Old Kingdom, Meryrahashtef's skull was discovered. Scientific analysis revealed that he had sustained a very serious, most likely fatal, skull fracture. Meryrahashtef may have been struck during a protest by angry farm workers or killed in battle. The collapse of the authority of Pharaoh Pepi II around this time resulted in the rise of regional power brokers called nomarchs. The shattered cohesion of Egypt lasted for 150 years until national unity was restored by the powerful Middle Kingdom dynasties in 2020 BC.
We don't like to think about ancient Egypt in terms of the grim circumstances of Meryrahashtef's death. The received wisdom about Egypt, especially under the Old Kingdom, was that the surrounding deserts protected this African nation from invasion. The Nile flooded, just enough and on time, to insure the provision of ample food supplies. With these basic needs provided for, Egypt's people were able to devote themselves to all the best that human beings are capable of. 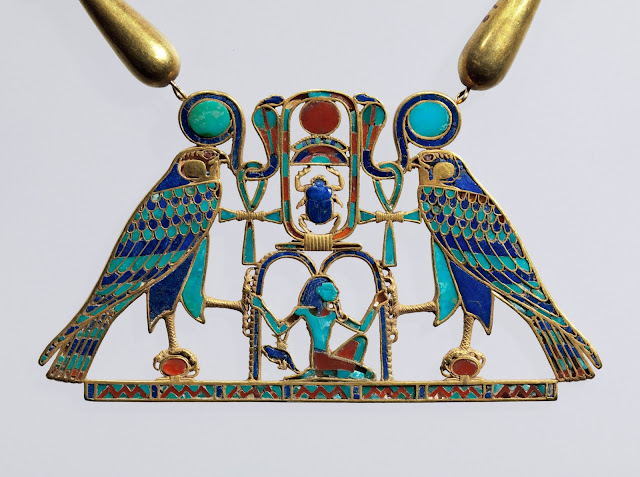 
The work ethic, skill and dedication of Egypt's people are reflected in this pectoral from a necklace worn by a Middle Kingdom princess. At the base of this pectoral is a symbol for "millions of years." This is an invocation of the perpetual power of the reigning pharaoh, mighty Senwosret II. But this sense of divine favor, harmony, and elan vital was maintained throughout Egyptian society over the course of nearly three thousand years.

Mesopotamian civilization, rising at the same time, was not so lucky. Devastating floods, recalled in the biblical story of Noah, and constant raids by nomadic tribes, made life in Sumer and Babylon much more of trial than on the banks of the Nile.

This rose-tinted view of Egyptian civilization is exemplified by the famous painting of Nebamun and his family on a hunting trip. Dating to the 18th Dynasty, ca. 1350 B.C., this scene is one of eleven wall-paintings from Nebamun's tomb-chapel which the British Museum purchased back in the 1820's. 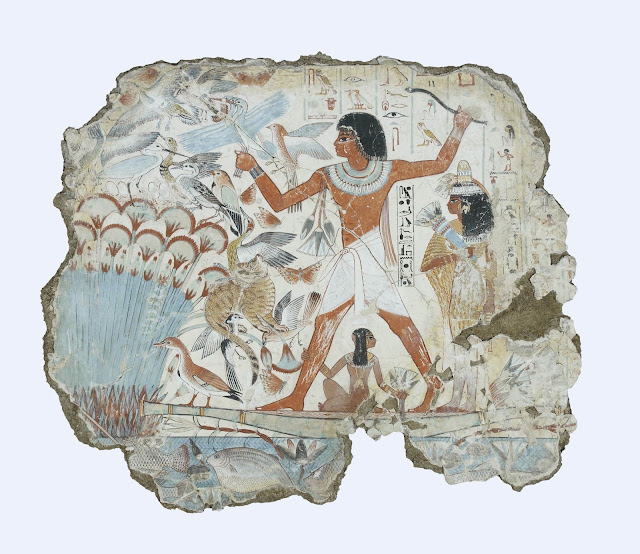 Nebamun with his wife and daughter capturing water-fowl (c.1350 B.C.)

Nebamun and his family are having a great time on their "camping" trip. Nebamun even brought his brown-tabby cat along to join in the festivities. We see the cat, with perfectly articulated fur and claws,  picking-off water fowl with the precision of a modern fighter ace. 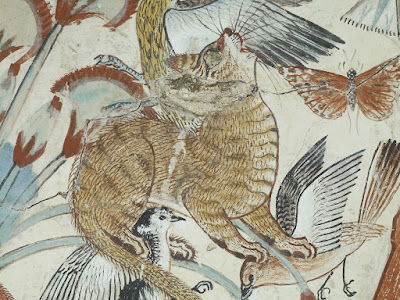 Nebamun with his wife and daughter capturing water-fowl (detail)

However, this is no holiday excursion, as Bill Manley perceptively notes in Egyptian Art. There are details of human mastery and divine favor at work here that make this painting an affirmation of  the "winning" of Egypt.

Nebamun and his family are not dressed for hunting and fishing in the Nile marshes. They wear their "Sunday-best," including the lump of scented wax atop his wife's wig. Nebamun's throw-stick is a snake and the fragile boat, made from papyrus, seems to be steered as if by magic.

Magic of a sort is indeed at work. Manley writes that these details "guide us away from the initial, literal interpretation of the scene towards a deeper meaning."

This remarkable painting depicts a virtuous Egyptian, Nebamun, in control of his earthly environment. This scene also prefigures the abode of eternal bliss, Aaru, the divine field of reeds. Here Nebamun will reside if his heart is judged favorably on the scale of justice by the goddess, Maat.

Since so much of Egyptian art evoked harmony on earth and the hope of heavenly reward, it is natural that we project a favorable assessment on Egyptian civilization. Thanks to the "gift of the Sahara," an abundance of everyday artifacts from Egypt has been preserved by the arid climate of the surrounding desert.

Ancient Egypt by Campbell Price is particularly well-stocked with such "grave goods."

Especially noteworthy is the Tarkhan Dress. The world's oldest known woven garment, this pleated linen dress or shirt dates to the First Dynasty of Egypt, 5,000 years ago. It was excavated in 1913 by the renowned archaeologist, Flinders Petrie, at the ancient cemetery of Tarkhan, south of Cairo. 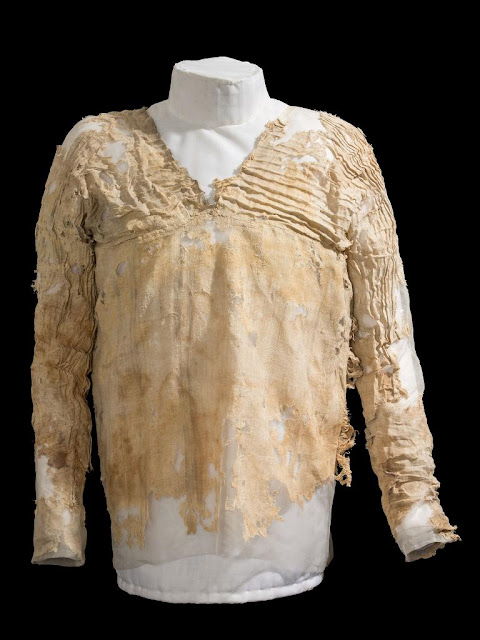 Ironically, it had to be rediscovered in 1977, as the garment was mixed with other textiles and was not recognized as an actual dress or shirt. (Lacking a hem at the bottom, it could be either.) Only in Egypt, could this remarkable survivor from remote antiquity have survived.

Wooden objects seldom stand the test of time better than textiles. But this small,piano-shaped game board is another "gift of the desert." Egyptians played a number of different board games, according to Campbell Price. This one pitted carved-ivory hounds versus jackals to see which player could reach the goal point in the middle of the board. The drawer is thought to have been used to hold the dice or knuckle bones used in the game. 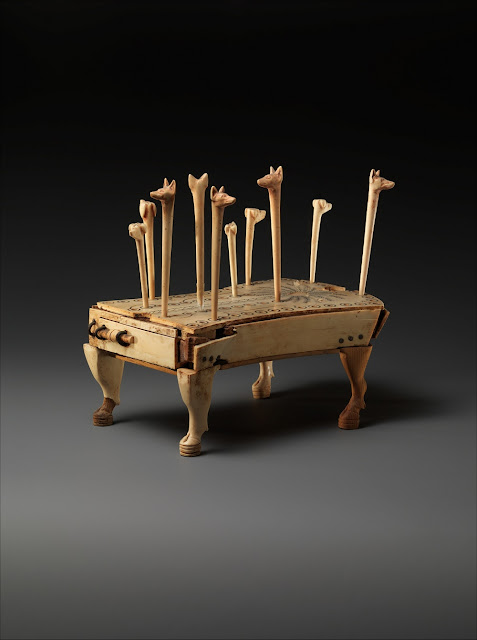 The Hounds and Jackals game, from the collection of the Metropolitan Museum of Art, is a favored art work of mine.  A replica of the game (considerably enlarged) was used in a key scene of the 1956 Hollywood epic, The Ten Commandments. I was startled one day at the Met by the exultant remark of another museum visitor who was transfixed before the case where this game board was displayed. After four thousand years, this object from antiquity can still cause delight and wonder.

These objects are confirmation of the "good life" in ancient Egypt. But other artifacts have been unearthed that put ancient Egypt in a less reassuring  light.

Despite the protective deserts, Egypt's rulers fought violent, bloody wars of aggression. Floor tiles, modeled after Nubian and Syrian war prisoners were placed in the palace of Medinet Habu, near Thebes, so that the glory-mad Ramesses III (1187-1156 BC) could enjoy the pleasure of walking on the prostrate bodies of his enemies, even in rare moments of peace.

Egypt's New Kingdom empire did not outlast Ramesses III for very long. However, the quest for meaning in life and in life hereafter among Egypt's people did persist.

Indeed, the number of people devoting themselves to the mystery cult of Isis and Osiris grew in number with the passage of centuries. And the process of preparing one's body and soul for the afterlife continued into the era of the Roman occupation of Egypt. 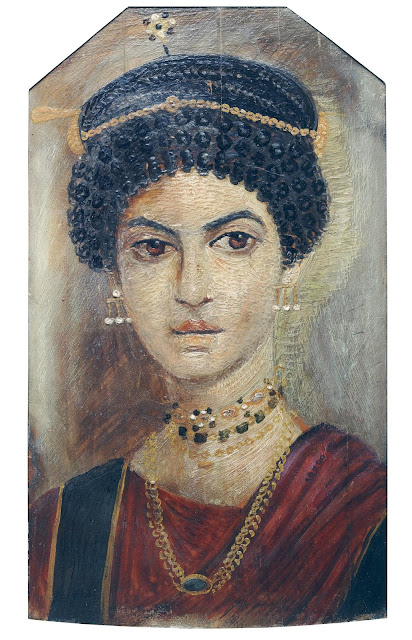 Mummy images might only be painted, using the encaustic paint technique, rather than encased in gold. Yet the centuries-long devotion of the people of Egypt to achieving eternal happiness opened the gates of heaven to all whose deeds in life outweighed their faults and failings.
In the final analysis, the greatest achievement of ancient Egypt was the promotion of the ideal of the ka. The ka was the spirit or life-force of each human being.

Bill Manley comments movingly on the philosopher, Ptahhatp, who declared that the "wise man is the one who nurtures his soul by realizing on earth the perfection within him."

Manley notes that Ptahhap's concept of perfection is not our "phantasmic 'ideal' of beauty" such as we project on film stars or "super" models. Egyptian statues, such as that of Pharaoh Menkaura, which introduces this review, may emphasize the perfection of face, torso, arms and legs. But these statues were more the symbols of the virtuous soul than the body beautiful. Manley writes:

Far from eternal youth, this is the radical opposite - spiritual growth. Of course, a statue is a physical object because it cannot be otherwise, but a sculpture in a tomb chapel illustrates the authority of the spirit. Hence these statues defy modern expectations of physical perfection and 'self-preservation', which may demand cosmetic surgery and denial of mortality. But then what do we know of the meaning of life, if our only purpose is just to stay alive.

The Egyptians of ancient times certainly devoted themselves to staying alive. Century upon century, they resisted the encroaching "red land" and used the life-restoring "gift of the Nile" to sustain body and soul. Ultimately, it was the soul - the ka - that really counted.

It was the ideal of the ka which made Eternal Egypt - eternal.

Images Courtesy of the Metropolitan Museum of Art, the Boston Museum of Fine Arts, the British Museum and the Petrie Museum of Egyptian Archaeology, London, and the National Museums of Scotland, Edinburgh. Book cover illustrations, courtesy of Thames & Hudson.

Striding Figure of Meryrahashtef. Ebony and sycamore, Height 22-7/8 in. Old Kingdom, Sixth Dynasty (about 2345-2181 B.C.) British Museum, acquired in 1923, purchased with the assistance of the National Art Collections Fund, # EA 55722,  ©Trustees of The British Museum

Nebamun with his wife and daughter capturing water-fowl (detail). (See above) ©Trustees of The British Museum

Posted by Art Eyewitness at 6:54 PM