Leonard Bernstein: the Power of Music at the National Museum of American Jewish History 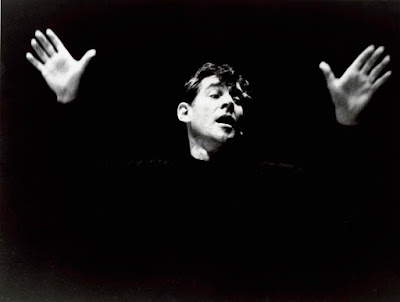 Leonard Bernstein: the Power of Music

The front page of the New York Times for November 15, 1943 was filled with reports of global war. The Soviet Army was counter-attacking the Germans in the Ukraine and the U.S. "island hopping" campaigns in the Pacific continued to batter the Japanese. At the bottom of the page was a story of a young American musician, aged twenty-five, who had been "drafted" to answer the call of duty. The scene of action was Carnegie Hall, not a World War II battlefield. The young musician's name was Leonard Bernstein.

This year marks a century since Leonard Bernstein's birth and the seventy-fifth anniversary of his legendary first concert as conductor of the New York Philharmonic. The National Museum of American Jewish History (NMAJH), located in Philadelphia, is celebrating the Bernstein centennial with an outstanding exhibit, Leonard Bernstein: the Power of Music. 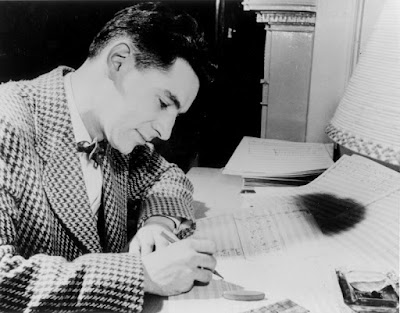 This is true, of course, in the way that he responded to the message that Bruno Walter, scheduled to conduct the New York Philharmonic, had fallen ill with the flu. Awakened on Sunday morning, November 14, 1943, Bernstein was ready to lead the orchestra at 3 PM that afternoon for a concert  broadcast on radio to the entire nation.

Clad in his best suit, as he did not own a tuxedo, Bernstein conducted the program without rehearsal. Schuman's Manfred Overture, a medley by the modern composer, Miklos Rozsa, Richard Strauss' Don Quixote and Wagner's Meistersinger of Nurnberg: Prelude had been selected. Under Bernstein's inspired direction, this demanding program was performed to such a degree of perfection that the Times deemed the concert worthy of front page coverage.

Bernstein answered the call of duty and of destiny many times throughout his life. In 1943, as the murderous Nazi genocide claimed victims in the millions, Bernstein, as an American and as a Jew, launched his own "counterattack." Bernstein demonstrated that civilized values would not be conquered by Nazi propaganda or by prejudice on the Home Front either.

From the moment he stepped-up to the podium at Carnegie Hall until his death in 1990, Leonard Bernstein never failed to champion noble causes and a dazzling variety of musical genres. But the astounding range of his talents and interests could well be a nightmare for exhibition planners.

This is especially true as music is a more difficult subject than the visual arts to convey to gallery visitors. Ivy Weingram,the curator of the Bernstein exhibit at the NMAJH, explained that the key to a successful presentation lay in Bernstein's own vision of his life's work.

Bernstein, as Weingram noted at the press preview, described his mission as a “search for a solution to the 20th‐century crisis of faith." Bernstein was unwilling to be confined to classical or "pop" music oeuvres. This restless search for musical fulfillment carried over to his determination to address the spiritual ills that plagued his era - and himself. 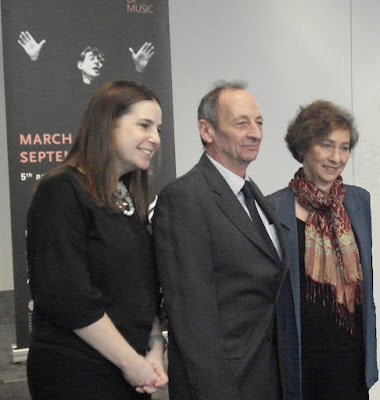 Two of Bernstein's children, Alexander Bernstein and Nina Bernstein Simmons, attended the NMAJH press event and spoke of their father's commitment to social justice. An inspiring, if little know event, when Bernstein conducted an orchestra of Holocaust survivors in 1948, was an outward manifestation of his passionate striving to help create an atmosphere where peace could take root and flourish.

Leonard Bernstein was born in Lowell, Massachusetts, in 1918. The exhibit displays a wonderful photo of him as a young child, with his parents. Bernstein's family were cultivated, practicing Jews and Leonard, as the eldest son, was expected to follow his father into the business world. But a chance encounter with a piano at age ten changed the direction of his life. 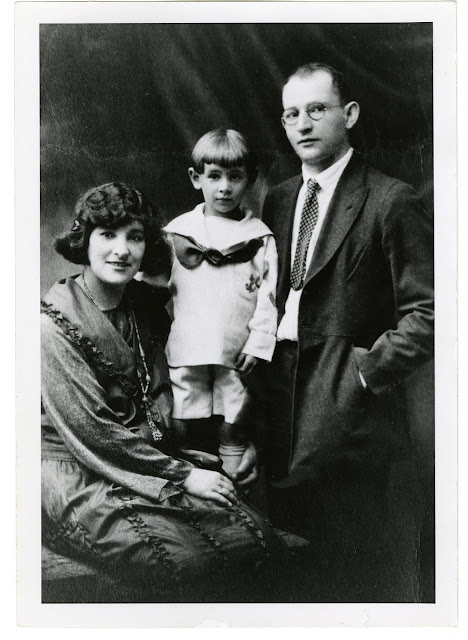 Leonard Bernstein with his parents, Jennie and Samuel Bernstein, c. 1921

Bernstein got his lessons. Later, Bernstein's study of music at Harvard, the Tanglewood Festival and the Curtis Institute in Philadelphia, where he graduated with a conductors diploma, set the stage for his celebrated Carnegie Hall debut in 1943.

At that moment, when most of his friends expected him to focus on classical music, Bernstein collaborated on the sensational Broadway hit, On the Town (1944). Was Bernstein fated to become a new Jerome Kern or Richard Rodgers? Some feared, some hoped he would. Bernstein was determined to remain Leonard Bernstein. 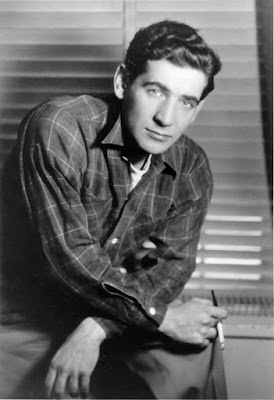 After the success of On the Town, Bernstein followed a career path, accountable to nothing save his own genius. He brilliantly mastered the new medium of television as a vehicle for promoting music appreciation, most famously with his Young People's Concerts on CBS. Bernstein wrote the musical score for the film, On the Waterfront (1954), and took a leading role in the revival of the symphonies of Gustav Mahler. 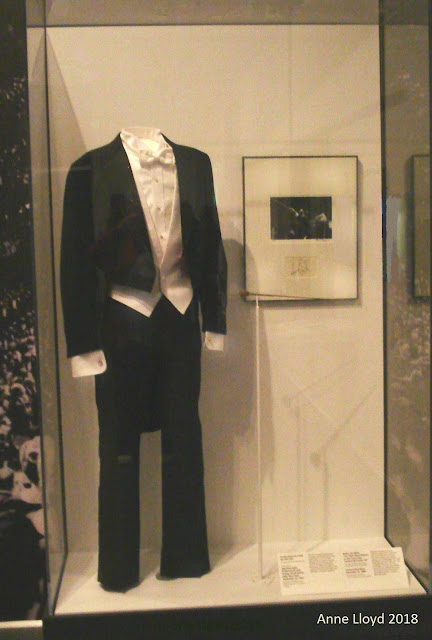 In 1958, Bernstein became the first American-born director of the New York Philharmonic, which Mahler had led a half century before. Bernstein regularly featured works by Mahler, conducting these with characteristic passion and insight.

Bernstein became so identified with Mahler that it was sometimes difficult to distinguish between the two musical titans. New York Times critic, John Rockwell, said it best, stating that Bernstein "has become a clear vessel for Mahler's genius."

Bernstein's own genius produced his own, most famous, masterpiece, West Side Story. Bernstein began working on the idea of updating Shakespeare's Romeo and Juliet in 1949.
The original plan called for the modern musical version to be an East Side Story, featuring conflict between Jewish and Catholic adolescents. But that was abandoned as not being "modern" enough. Social conflict had changed gears in the 1950's, with rising racial tensions between the growing Puerto Rican population and native-born New Yorkers. 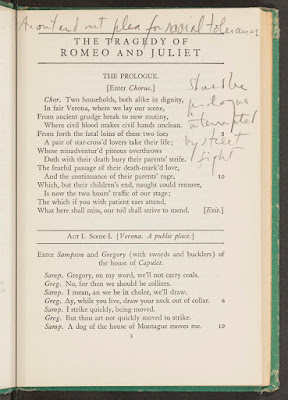 The exhibit highlights West Side Story with Bernstein's annotated copy of Romeo and Juliet, a terrific picture of Bernstein with Jerome Robbins and Stephen Sondheim at a rehearsal of the play and a video presentation showing scenes from the film version of West Side Story juxtaposed with clips from television shows, music videos and fashion ads which have found inspiration in this immortal American musical.

West Side Story does not steal the show in Leonard Bernstein: the Power of Music. But a multi-media interactive, entitled "Samples of Faith" nearly does. Designed by DOME Collective, a Brooklyn-based digital studio, nine of Bernstein's major works are highlighted for exhibit visitors to explore. 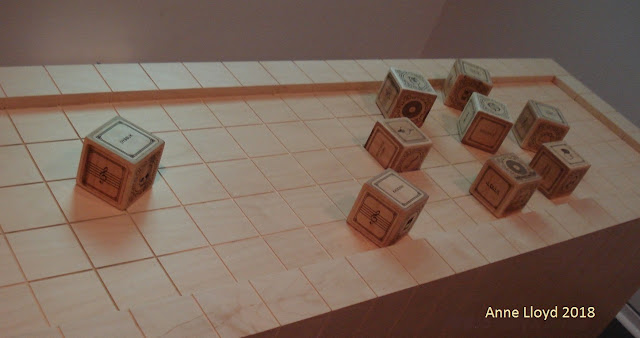 Each musical work is represented by a building block. When these blocks are inserted into the blue docking station, Bernstein's composition comes alive with music, information and imagery. Place another side of the block in and more of the same mix of melody, image and insight spring into action. 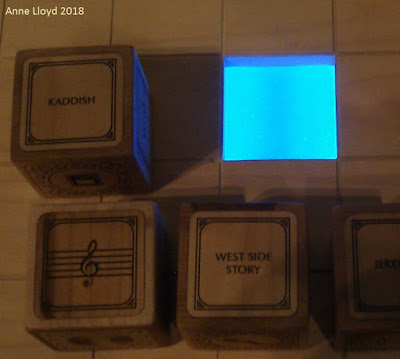 Anne Lloyd, Photo (2018) Detail of the "Samples of Faith" interactive

Words do not do justice to "Samples of Faith" and I don't exaggerate. Normally, I regard such multi-media presentations in exhibitions as a nuisance. This interactive is both addictive and enlightening. Along with West Side Story and Candide, lesser known works such as Kaddish, Age of Anxiety and Chichester Psalms are given their due. 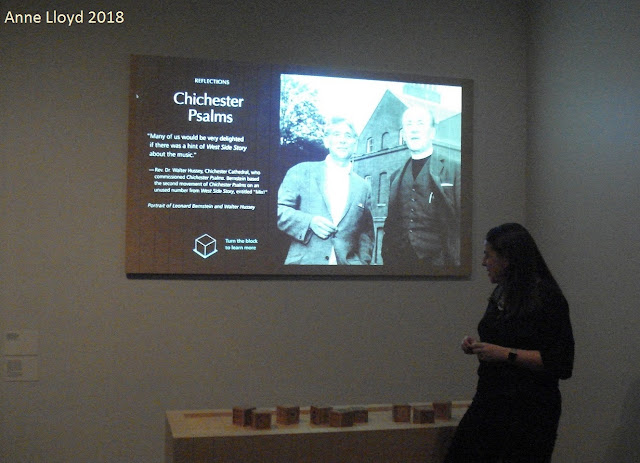 The only problem with "Samples of Faith" is that it may distract visitors from spending sufficient time with the other "show stoppers" of the exhibit. There are a lot of these in Leonard Bernstein: the Power of Music.

On display are Bernstein's conducting suit (when he could finally afford to buy one) and his baton. The Kiddush cup presented to Bernstein by his wife, Felicia Cohn Montealegre, occupies a prominent place in the exhibit, as does Bernstein's Steinway piano. 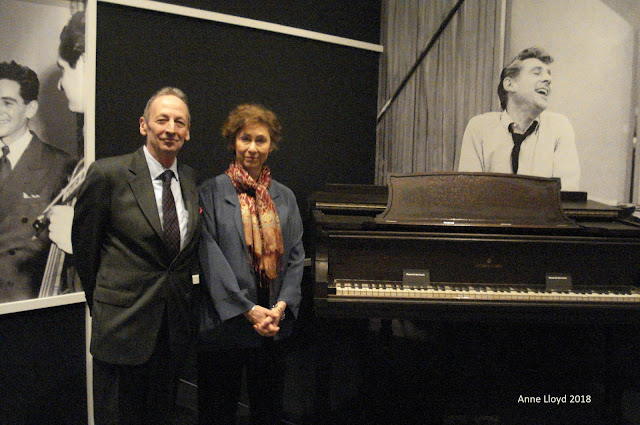 What a treat it was to have Alexander Bernstein and Nina Bernstein Simmons pose by their father's piano. It felt like being invited into the Bernstein home, which is a most appropriate way to describe this wonderful exhibit at the National Museum of American Jewish History.

All of the photos and mementos on view must ultimately be viewed with the exhibit theme in mind. Did Leonard Bernstein succeed in his “search for a solution" to the 20th‐century crisis of faith?

The answer to that question is that Bernstein died trying, looking, searching... for answers, for solutions. I think we can say that this great, passionate, lion of a man is searching still, through the inspiration of his music, impelling and encouraging each of us to find a "solution to the 21st‐century crisis of faith."

Posted by Art Eyewitness at 8:21 PM