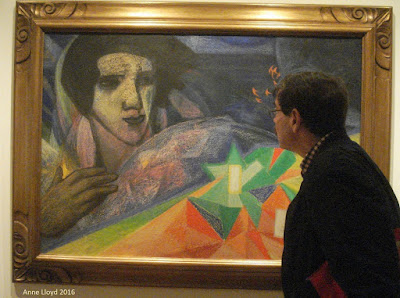 A World of Art

Why do people create? Why do people "do" art? After five years of working on Art Eyewitness, I'm no closer to understanding the wellspring of creativity than when I started this blog in 2013.

Five years, on a human timeline, is both a short interval and a sizable chunk of life. It seems appropriate to reflect upon what have I seen and shared about art in these five years. But in taking stock of how much more I "know" about creativity, then I'm forced to confess to being "five years older and not a bit wiser."

I am not alone when it comes to being mystified about creativity and the arts. Leonard Bernstein, whose centennial is being celebrated with a wonderful exhibit at the National Jewish Museum in Philadelphia, reflected upon the spark of creativity and declared:

That, thank Heaven, is still a glorious mystery; and it is a mystery that enshrouds every good artist I know, rich or poor, successful or not, old or young. They write, they paint, they perform, produce, whatever, because life to them is inconceivable without doing so.

Bernstein went on to plead with God to " leave us this one mystery, unsolved: why man creates."

The great maestro's prayers have so far been answered. The mystery of human creativity still eludes us, as it did during Rembrandt's final, tragic decade. 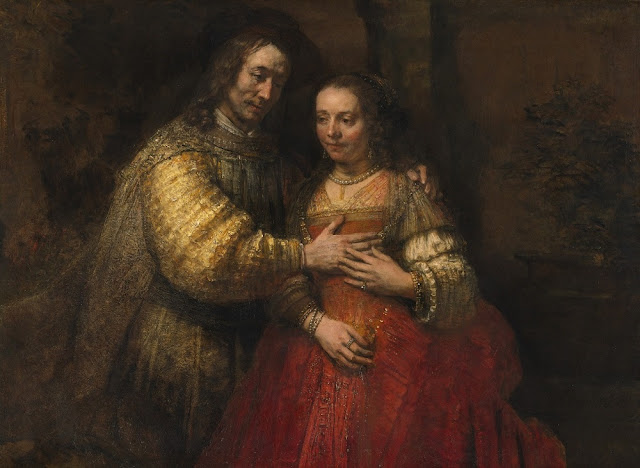 Why did Rembrandt continue to paint, as his world crashed down about him during the 1660's? Bankrupt, his style no longer popular with middle class patrons, haunted by the death of his son,Titus, the chain of disaster was only broken by his death in 1669. Yet, during this time of woe, Rembrandt created the supreme masterpieces that were displayed in the 2014 exhibit at London's National Gallery.

How Rembrandt painted such works is no mystery. Why he did it, is.

I couldn't agree more with the sentiments of Bernstein's plea that the question of creativity remain unresolved. Art Eyewitness is an attempt to understand how people create in the realm of the visual arts rather than why they do so.

Yet, the voice of why keeps trying to make itself heard.

Bernstein's comment that "life to them (artists) is inconceivable" without art is absolutely true. I would add that art is also a way for human beings to make death conceivable. 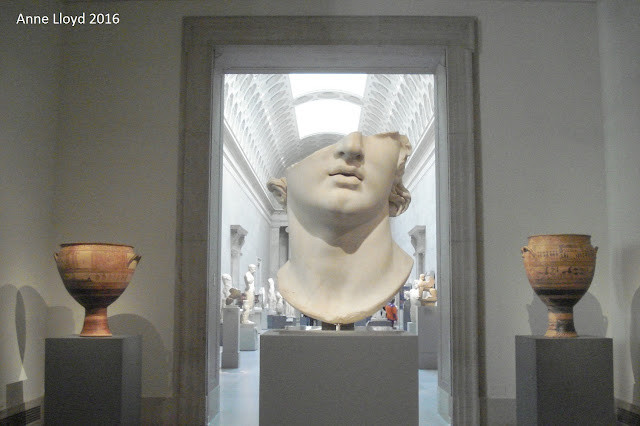 
So much of the art that I have studied and written about over the past five years can be traced to the effort to comprehend the mysteries of life and death - and life hereafter.  The ancient Greek quest to "know thyself" constantly encounters the even more ancient Egyptian concern to secure the eternal well-being of the soul, the ka.

Transience or transcendence. We see these epic themes on display in great art museums and their wonderful special exhibits. We see these themes at work in our daily lives and in the special challenges that life sends our way. To properly understand art, you need to see works of art in person and in the company of other people, who are grappling with their own daily dose of "outrageous fortune." 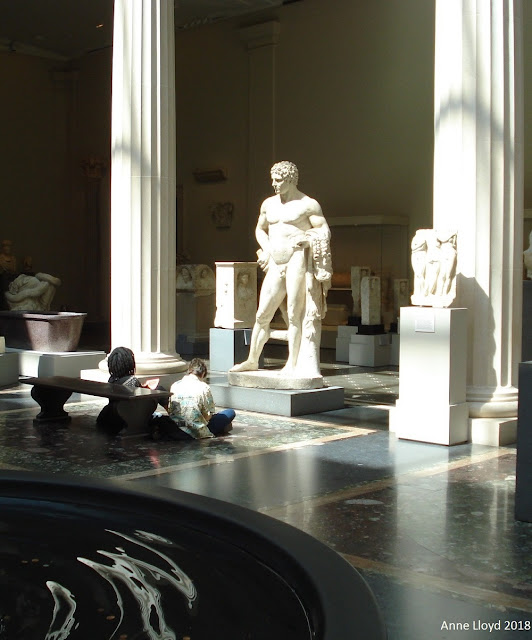 Anne Lloyd, Photo (2018)
Gallery view of the Greek & Roman Galleries at the Metropolitan Museum of Art
A quiet moment at the Metropolitan Museum a few months ago reinforced how vital is the companionship of other museum patrons to appreciating art. Here in the Greek and Roman galleries, some students were sketching a statue of Hercules. Here, I could see the Greek and Egyptian quests for self-awareness and spiritual transcendence taking place. Art was happening.

Down the hall, curators at the Metropolitan were at work setting mannequins in place for the Heavenly Bodies: Fashion and the Catholic Imagination exhibit. I was struck by the subversive thought that the draped mannequins had a tale of their own to tell before being adorned in high style for the exhibit. 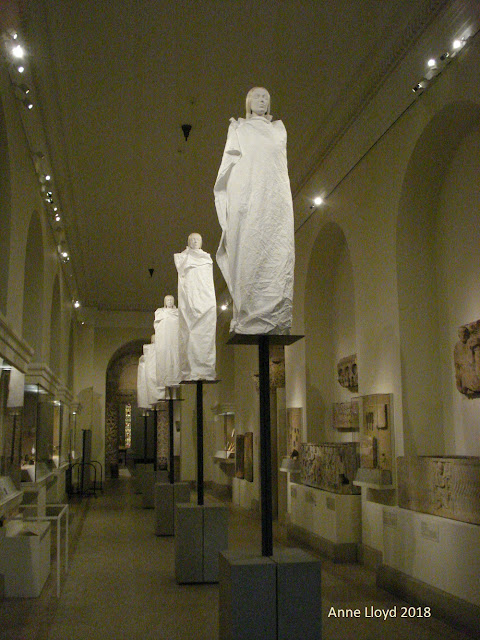 
The sight of those mannequins, "blithe spirits" hovering in the Met gallery, made me think of all the generations of patrons and art lovers who have climbed the steps and thronged the galleries of the Met, of the Philadelphia Museum of Art, of your favorite art museum wherever it may be. 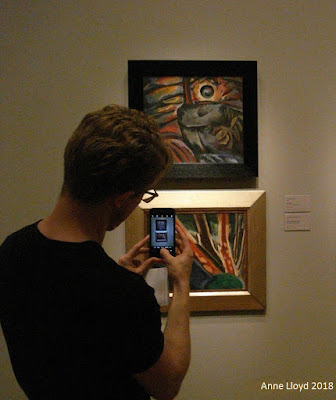 Patrons come to art museums to sketch or to paint, to commune with the higher spirits, to know themselves, to write a school term paper, to record their experience with digital photos, to have fun.

All of these activities are part of the process of sharing in art. I plan to do an essay at some point about the role of the art patron, but for now I can't think of a better work of art to symbolize the paramount importance of the art lover/patron than Woman Viewed from Behind (Visit to a Museum) by Edgar Degas. 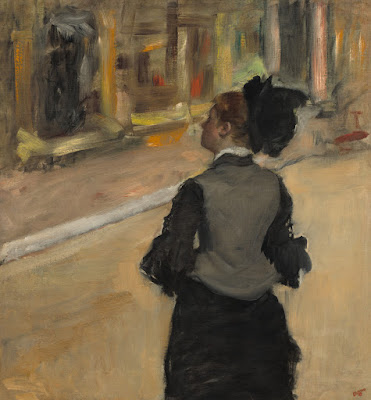 In true Impressionist style, Degas gives a only suggestive hint of the paintings on the gallery wall. Here - and always - it is the interaction of the art lover with the work of art that really matters. Art appreciation is how a patron experiences art.

It is a rich and rewarding experience to be able to view, study and reflect upon a work of art and then come back for another look. I always pay a visit to Jules Bastien-Lepage's Joan of Arc. 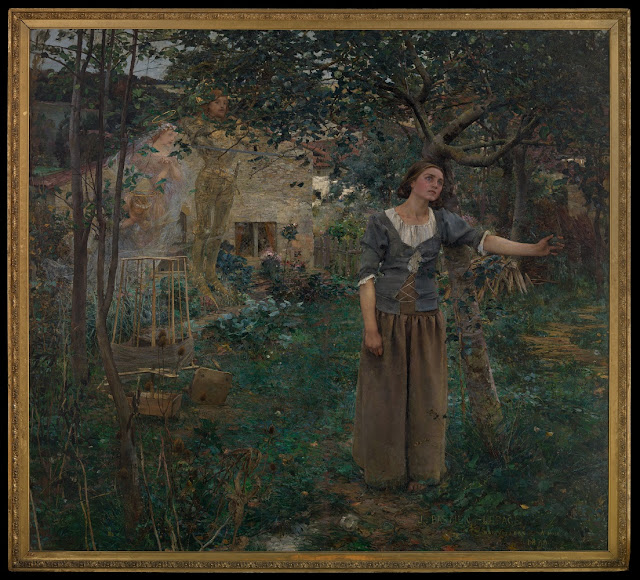 Painted in 1879, this image of the Maid of Orleans and her heavenly visitors is one of the oldest works of art in the collection of the Metropolitan Museum of Art. It was a favorite of my mother's and I always experience something new or meaningful about life when I see it.

The "experience" of art in special exhibitions is even more compelling and immediate because there will never again be an exhibit quite like the one you are seeing right now. This moment.

Special exhibitions at art museums take years to plan and organize. In the case of the fantastic 2017 Michelangelo exhibit at the Metropolitan Museum, the curator, Dr. Carmen Bambach, worked for eight years to secure the nearly two hundred works of art which appeared in the exhibit. Never before had so many of Michelangelo's drawings and smaller sculptures appeared in one exhibition. Never have the ceiling frescoes of the Sistine Chapel been so convincingly evoked than by the lighted scale model on view in the Met's exhibition galleries. 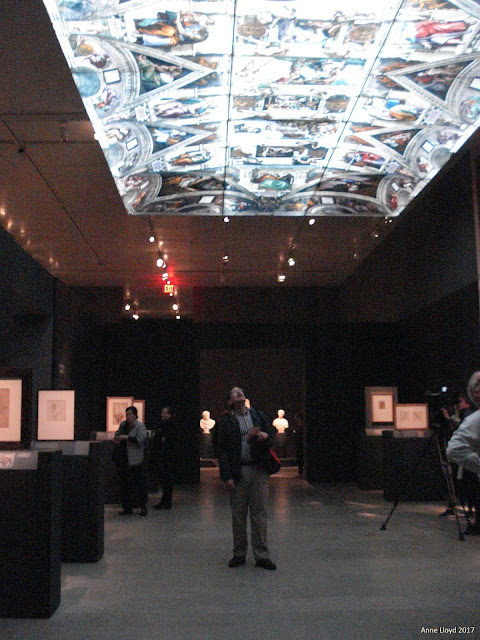 "This moment" for Michelangelo: Divine Draftsman and Designer lasted three months. It is safe to say that there will not be such a vast and brilliantly curated exhibit devoted to the work of Michelangelo for many years, perhaps decades. Eight years work for a three month display is a sobering thought.

That's where Art Eyewitness comes in. The aim of this blog is to spread the word about great exhibitions like Michelangelo: Divine Draftsman and Designer. We encourage art lovers to make the pilgrimage to see for themselves. Just as importantly, Art Eyewitness aims to make available a "virtual visit" to these exhibits for those unable to make the trip.

It has been - and continues to be - a great experience to recreate the sights and spirit of these magnificent evocations of human genius and creativity. Beginning with a visit in July 2013 to Diaghilev and the Ballets Russes, 1909–1929 at the National Galley in Washington D.C., Art Eyewitness aims to share the appreciation of art from all cultures and historical epochs. 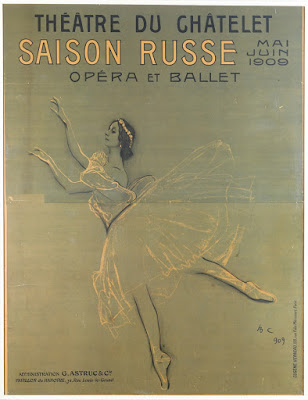 It is rather ironic that the first review of Art Eyewitness dealt with Serge Diaghilev (1872-1929). Before he became the impresario of the ballet world, Diaghilev co-founded the art magazine, Mir iskusstva in 1899. Diaghilev's endeavor included mounting art exhibitions and lectures in order to promote liberal cultural values in Russia and ultimately throughout the world.

Mir iskusstva  translates as "World of Art." What Diaghilev and his colleagues, the miriskusniki, endeavored  to achieve, the curators and exhibit design teams of our great museums are doing now. These visionary and incredibly accomplished people open up the World of Art to us.

Trying to pick "stand-out" exhibitions from the crowded canvas of Art Eyewitness reviews is a foolhardy enterprise. I won't try to do so. Instead, I will highlight three: Lost Kingdoms: Hindu-Buddhist Sculptures of Early Southeast Asia, 5th to 8th Century at the Metropolitan Museum of Art (2014), Power and Pathos: Bronze Sculpture of the Hellenistic World at the National Gallery of Art in Washington D.C. (2015) and Charlotte Brontë: an Independent Will at the Morgan Library and Museum (2016). 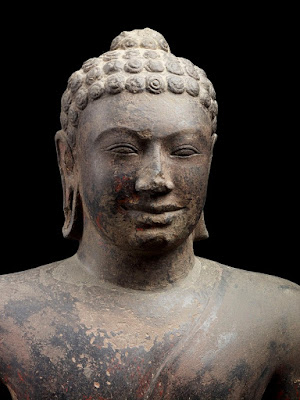 These exhibitions opened a portal to the respective historical periods being surveyed. I knew little about the art of the bygone realms of ancient Asia when I walked into the astonishing Lost Kingdoms exhibit gallery at the Met. When I left, I felt as if I had been transported to these Hindu and Buddhist kingdoms and I wanted to learn more. 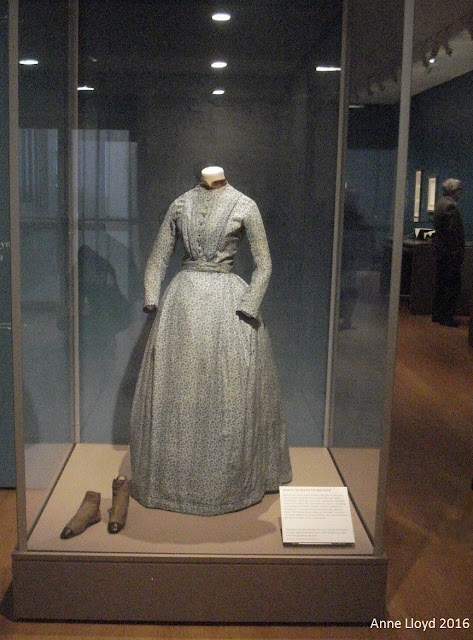 Though I am more familiar with Victorian England and a huge fan of the Brontës, my mental and spiritual universe was expanded by the sensational Morgan exhibit celebrating the two hundred year anniversary of the birth of Charlotte Brontë. That might sound like extravagant praise but in the case of Charlotte Brontë: an Independent Will it was thoroughly deserved.

There was a powerful religious element to Lost Kingdoms. Likewise, Charlotte Brontë was not just a strong-willed woman, an early feminist according to current views. She was a devout Christian. Divinity and the human craving for transcendence cannot be ignored.

This phenomenon accounts for the rejection of classical art forms during the later stages of the Roman empire. Depictions of the Greek ideal of the "body beautiful" were discarded for a less sophisticated, yet intensely devotional art. 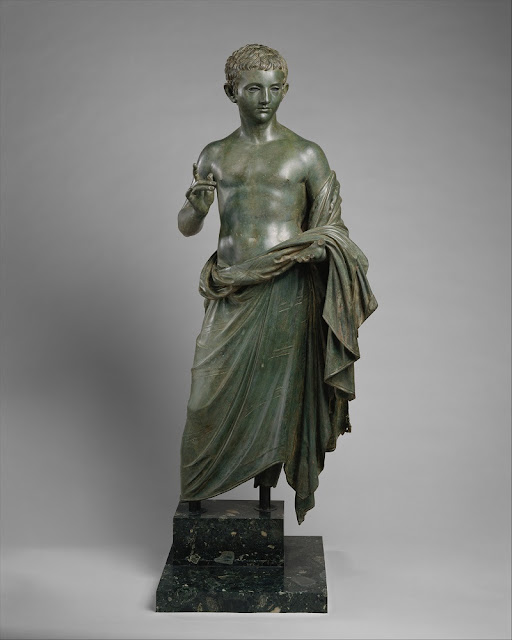 For over a thousand years, religious icons and images were the supreme statements of Western art. This was a theme I addressed in several Art Eyewitness posts, notably Power and Pathos: Bronze Sculpture of the Hellenistic World. 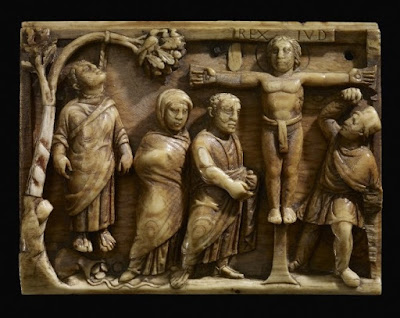 To offer a "virtual visit" to these great exhibits, as I mentioned earlier, would be an empty gesture were it not for the phenomenal photos which my wife, Anne Lloyd, has been taking for Art Eyewitness since the summer of 2014. 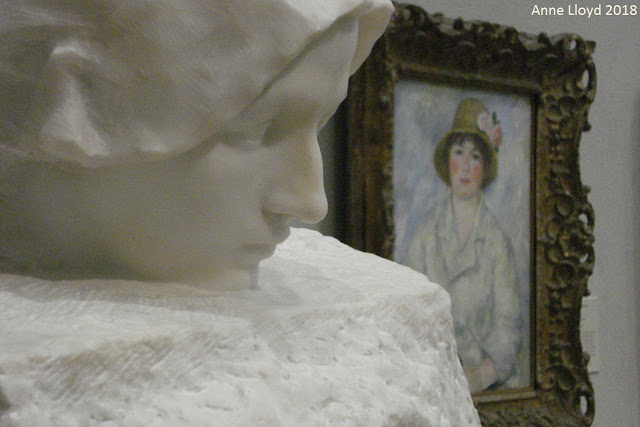 Anne Lloyd, Photo (2018) Gallery view of the Philadelphia Museum of Art
Rodin's Thought is in the foreground, Renoir's Portrait of Madam Renoir behind

Anne is an accomplished artist in several media. Thanks to her skill with a camera and her artist's eye, Anne has raised the level of visual reportage of Art Eyewitness to a superlative degree.

It was thanks to Anne's ability and determination that Art Eyewitness achieved what I (humbly) claim is a "show-stopper" caliber photo of the great David Hockney. The legendary Yorkshire painter appeared, unannounced, at the press preview of the Metropolitan Museum's Hockney retrospective in November 2017. Hockney was an illusive subject but Anne was not to be denied. 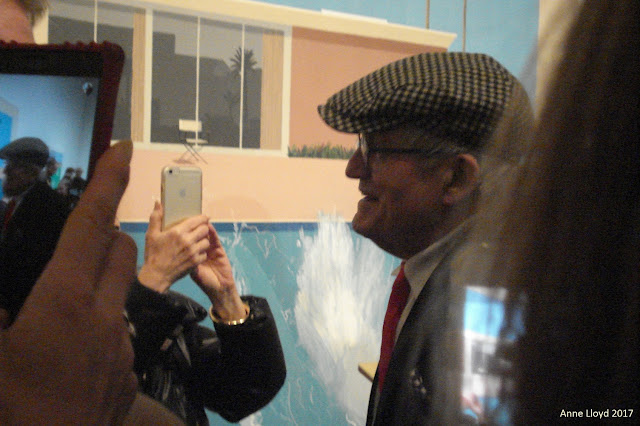 "Astound me!" That quote from Serge Diaghilev to the set designers of the Ballet Russes were the opening words of my first review for Art Eyewitness five years ago.

Well, I have been astounded and inspired many times in the last five years. I hope for more such moments to come. It may, however, be outrageous to say in this blog devoted to art exhibitions, that you don't need to go to museums to be astounded by beauty. Just look out your front door. 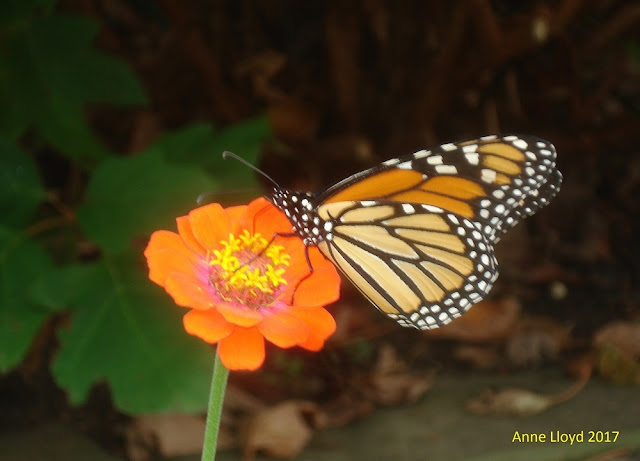 Anne Lloyd, Photo (2018), Gallery View of the Greek and Roman Galleries at the Metropolitan Museum of Art, New York City.

Anne Lloyd, Photo (2018), Gallery View of Preparations for the Heavenly Bodies: Fashion and the Catholic Imagination exhibit at the Metropolitan Museum of Art, New York City.

Buddha Offering Protection, Southern Cambodia, Pre-Angkor period, second half of the 6th century. Sandstone with traces of lacquer and gilding. Lent by the National Museum of Cambodia, Phnom Penh, to the Metropolitan Museum of Art for the 2014 exhibit, Lost Kingdoms: Hindu-Buddhist Sculptures of Early Southeast Asia, 5th to 8th Century.

Anne Lloyd, Photo (2016) Gallery view of Charlotte Brontë: An Independent Will (the "Thackeray dress") at the Morgan Library and Museum, New York City. 2016.

Posted by Art Eyewitness at 4:03 AM