Salt and Silver, Early Photography, 1840-1860 at the Yale Center for British Art 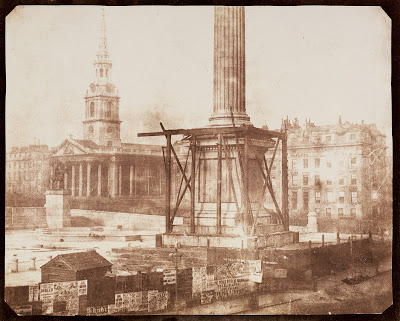 In art, as in the rest of life, timing is everything.

The Yale Center for British Art is currently presenting an exhibition on the birth of photography during the years following 1839. In that year, two distinct forms of "fixing an image" were created. The timing of these startling innovations was impeccable, just in time to record the Victorian age!

The Yale exhibition, Salt and Silver, Early Photography, 1840-1860, showcases rare early photos from the collection of the Wilson Center of Photography in London. The exhibit focuses on the photographic innovations of the English aristocrat, William Fox Talbot (1800-1877) and notable successors including Robert Adamson and Roger Fenton. 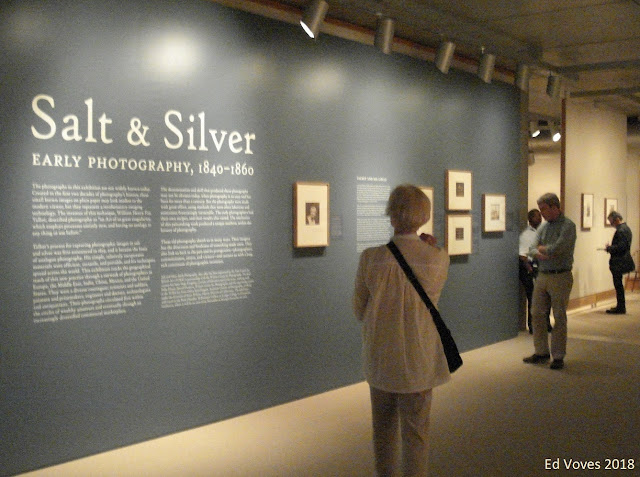 Ed Voves, Photo (2018), Gallery view of the Salt and Silver exhibit
at the Yale Center for British Art.

During the 1830's, as we will comment upon in some detail, Talbot experimented with creating or "fixing" an image. Talbot initially called his endeavor "photogenic drawing."
Using a small, crude box camera, Talbot focused the lens to project an image on to a piece of paper, placed inside. The paper had been soaked in salt water and then brushed with a solution of silver nitrate. This recipe rendered the paper photo-sensitive - thus giving the Yale exhibit its unusual name.

Talbot was a true polymath, what we would call a Renaissance man. He was expert in solving mathematical equations and the study of ancient cuneiform writing. For good measure, Talbot was elected to Parliament in 1832.

As a result of his wide-ranging interests and duties,Talbot devoted only a portion of his time to experiments with "photogenic drawing." He only went public with his discoveries after the French artist, Louis Daguerre, introduced his method of "fixing" an image on silver-plated sheets of copper.

Daguerre was something of an opportunist, but to be fair, he had been at work on finding a photographic process longer than Talbot. Beginning in the mid-1820's, Daguerre collaborated with a brilliant French scientist, Nicéphore Niépce. A "light painting," the world's first experimental photograph, was made by Niépce in 1827 but he died in 1833. Daguerre carried on with the research and in January 1839, he demonstrated his photographic technique.

Talbot was rather chagrined to be bested in a competition that he had not realized even existed. Moreover, his salt-based images compared unfavorably with the clarity of Daguerre's photos. Talbot introduced a more light-sensitive paper and, at the suggestion of Britain's leading scientist, Sir John Herschel, he used hyposulfite of soda as a "fixer" for his images. The September 1840 experiment was a complete success. “Hypo" is still used today in the process of keeping black-and-white prints from fading.

Talbot called his new and improved process, calotypes, from the Greek word for beautiful, kalos. Calotypes, also called "Talbotypes," marked the introduction of the negative-based version of photography. Many prints of a photo could be produced from a negative rather than just one, as was the case with Daguerreotypes.

Despite these improvements, calotypes remained vulnerable to fading. Talbot was vigilant with quality control and actually convened a group of experts called the "Fading Committee" to deal with the problem. He also spent much of his later years developing the photogravure process which enabled photos to be reproduced and printed as illustrations in books and magazines.

With the massed production methods of the Industrial Revolution now underway, William Fox Talbot’s techniques were unveiled at the most propitious moment that could be imagined. He was a true scientific revolutionary, while remaining emotionally rooted in the Romantic-era mindset of his personal hero, Sir Walter Scott. 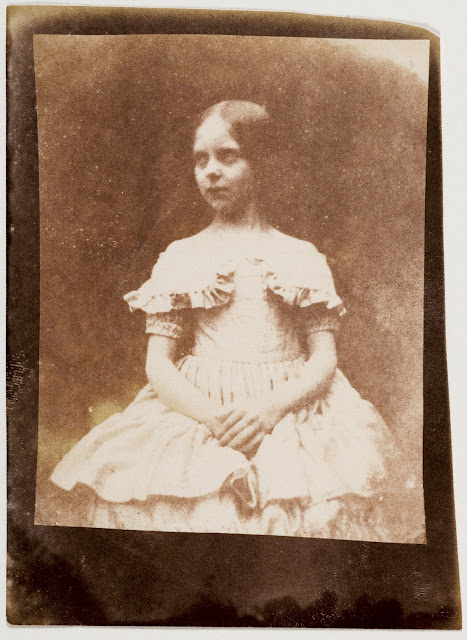 Talbot's calotypes, like the 1843 portrait of his daughter, Ela Theresa, combine startling realism with an otherworldly nuance. When you focus on little Ela's well-delineated hands, you can almost sense the feel of the fabric of her dress on her hands. Yet her face, with its deep-set eyes, belongs in a different dimension of reality.

These comments are based on a subjective interpretation of the circumstances of the "fixing" of this image. Ela Theresa was eight years old when this photo was taken. It must have been an excruciating ordeal to hold her pose long enough for her father to "fix" her image. Likewise, the fact that Talbot used salted paper accounts for its hazy, ghost-like aspect.

It has to be admitted, however, that all photos are "ghosts" of the image they fix. Regardless of the technique or materials used, photographs are but faint traces of what was.To achieve that effect motivated Talbot to set about trying to discover a way to "cause these natural images to imprint themselves durably, and remain fixed upon the paper."

In 1833, Talbot endeavored to use a camera lucida, a draftsman's tool which projected an image on a sketchbook so that it could be more readily drawn.This experiment was not a success. Talbot was grieved that he could never fully capture “the inimitable beauty of the pictures of nature’s painting which the glass lens of the Camera throws upon the paper in its focus — fairy pictures, creations of a moment, and destined as rapidly to fade away.” 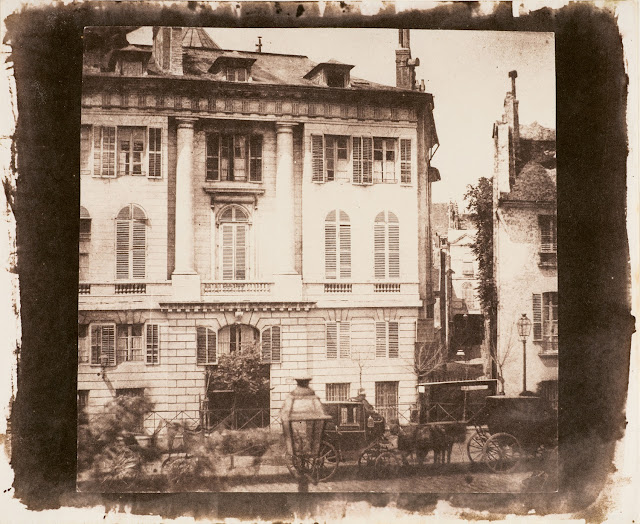 Talbot's calotypes retained an element of "fairy pictures" even as he increasingly found ways to make these images more durable. Yet, he was a man of science and he set about "fixing" all manner of images from the construction of the column honoring Lord Nelson in London's Trafalgar Square to Paris street sciences to botanical specimens and classical busts in the British Museum. 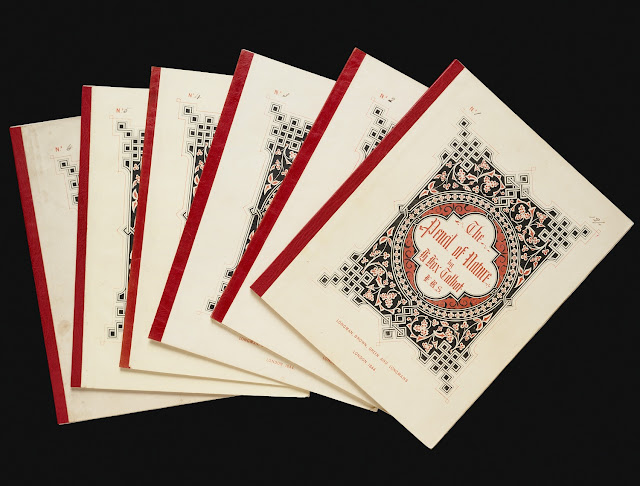 William Fox Talbot, The Pencil of Nature,1844–46
Courtesy of the Metropolitan Museum of Art - Not on view in Salt & Silver exhibit

Talbot may have come in second to Daguerre but he was the first to publish a book illustrated with photos. Published as a series between 1844 and 1846, The Pencil of Nature, is recognized today as the "Gutenberg Bible" of photography.

The decade of Talbot's great achievements was not a time for relaxed, ivory-tower research. The "Hungry 40's" were marked by deadly cholera epidemics, the Irish Potato Famine and the beginning of organized labor centering on the Chartist petition to Parliament. The ideal of "the People" was making itself felt.

Talbot's calotype methods was used by two Scotsmen, David Octavius Hill and Robert Adamson, to document the lives of Scotland's "people."  A colleague of Talbot, Sir David Brewster, taught the calotype process to Adamson, barely into his twenties and looking to make his mark. Hill, a veteran painter, was more dubious. But Adamson convinced him to use photo portraits of Scottish clergymen as source material for painting a group portrait. In short order, Hill embraced photography with the "faith of the converted."

The painting, when it was completed years later, was a "dud." But the calotype portraits were hailed as an immediate triumph.

“The pictures produced are as Rembrandt’s but improved,” declared the  watercolorist John Harden after seeing Hill and Adamson’s calotypes. He was only slightly exaggerating. 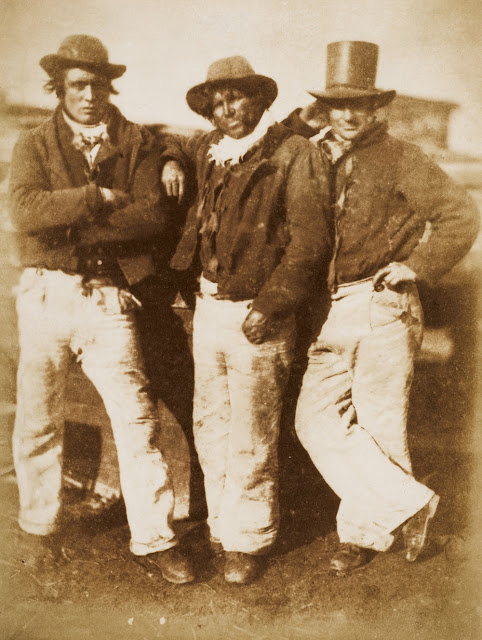 Hill and Adamson next focused their attention on the fishing village of Newhaven, home to some of Scotland's most rugged seamen and their redoubtable wives. This extraordinary documentation of the nobility and humanity of everyday people - the "laboring classes" - has never been surpassed, even by the WPA photographers during America's Great Depression almost a century later. 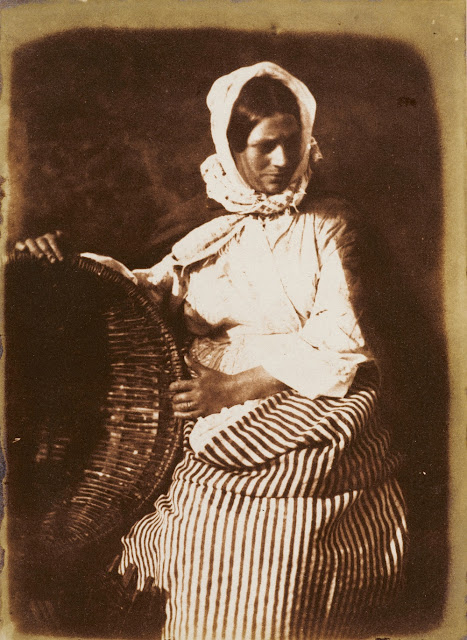 The possibilities and potential of photography were being explored and tested in ways that were strikingly modern and democratic. In a few short years, the dynamic team of Hill and Adamson made over three thousand photographs.

Then tragedy struck. Adamson died in 1848, aged twenty-six. One of the great artistic partnerships of all time was cut-short in its first flowering.

In 1855, at the suggestion of Prince Albert, Roger Fenton was sent to record the military campaign against Russia in the Crimean War. For the first time, an authentic view of the insanity of war was made possible. 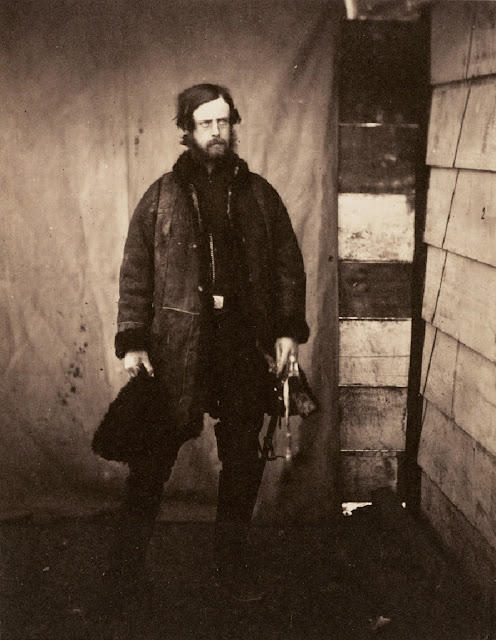 That is exactly what we see on the beleaguered face of Lord Balgonie of the Grenadier Guards. Much of the Crimean War was fought in trenches similar to World War I, with bone-numbing cold adding to the horror. Lord Balgonie looks out at us with what modern psychologists call the "thousand-yard stare." He died shortly after the war from his wounds.

The sharpness of Fenton's images was the result of a new innovation in photography. Glass plates were used as negatives, despite their bulk and fragility. Amazingly, a British officer in India, Linnaeus Tripe, used glass plate negatives under very difficult conditions for his topographical study of the ancient temples and buildings of India and Burma. 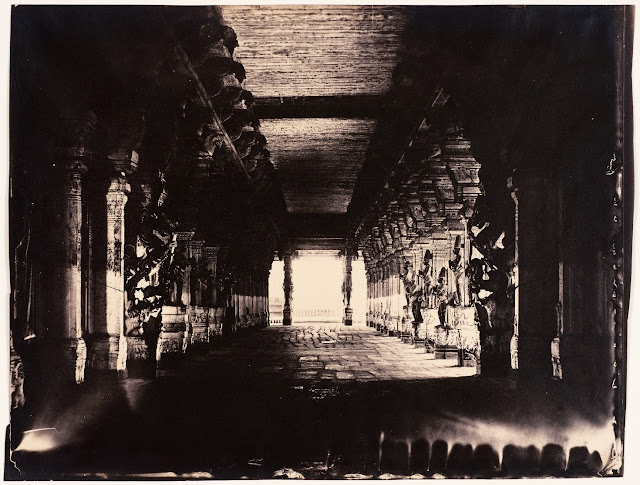 Tripe also used waxed-paper negatives, another in the proliferating innovations of photography. By 1860, the point at which the Yale exhibit ends, Talbot's calotypes were seldom used. In 1858, John Wheeley Gough Gutch "fixed" the image of the ruins of Tintern Abbey, using a glass plate negative. It was very much in the spirit of Talbot's work, modern in technique, romantic in spirit. 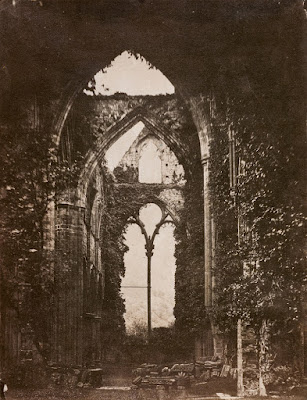 In later life, as we have seen, William Fox Talbot devoted most of his available time and energy developing the photogravure process. Considering the flood of images which now engulfs the modern world, Talbot's accomplishments in the realm of printing are almost as important as his innovations in photography.

The curators of Salt and Silver wisely refrained from prolonged study of the development of photogravure. The exhibit also does not examine the way that Victorian painters used photography as an inspiration for their work. A recent Tate Britain exhibition, Painting with Light, covered that topic with a comparative display of Victorian paintings and photos in 2016.

Because of their sensitivity to light, calotypes can rarely be shown. We therefore have a lot to be grateful for to the Yale Center for British Art for presenting this wonderful display of the founding works of photography.

Salt and Silver is a magical exhibition devoted to a truly "magic" moment in the history of art.The birth of photography occurred just as the modern world made its presence felt in the shape of the Industrial Revolution. Photography was there, at the ready, to make a record.

William Fox Talbot opened our eyes just in the nick of time.

Posted by Art Eyewitness at 4:52 PM