Corot: Women at the National Gallery of Art, Washington D.C. 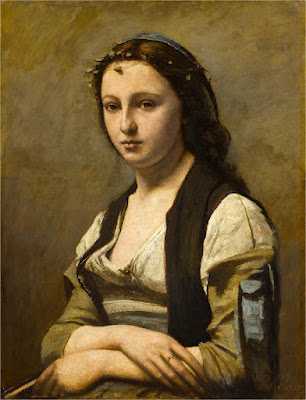 The frustration of work, the "daily grind," can affect everyone, even great artists like Jean-Baptist-Camille Corot (1796-1875). No one is immune from the urge to post an "out to lunch" sign and set off to try their hand at something new and exciting.

Corot's "extracurricular" pursuits are the subject of an important exhibition at the National Gallery in Washington D.C. But to get a sense of why artists depart from the well-trodden paths to fame and fortune, a brief moment with another Old Master is in order.

Having gained renown and a handsome income from immortalizing the faces of Victorian worthies - and more importantly their wives - John Singer Sargent (1856-1925) declared "Portrait painting is a pimp's profession."

Sargent, whenever he could, ventured to mountain and stream, creating some of the greatest landscape works of the late nineteenth century, primarily in watercolor.

This was exactly the opposite of what Camille Corot had done earlier, beginning in the 1840's. Having established himself as France's preeminent landscape painter, Corot began a series of figurative studies which explored the human psyche in unexpected ways. 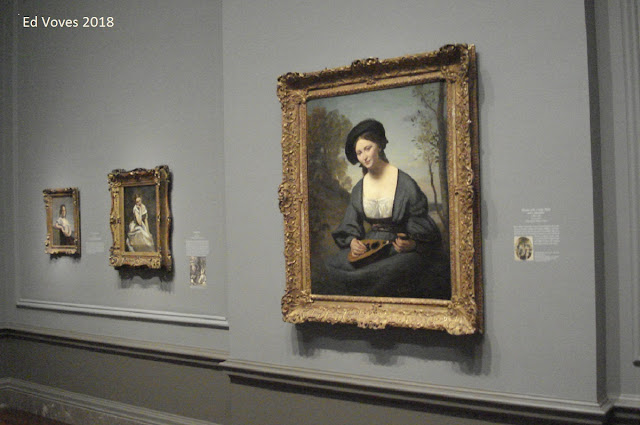 Corot: Women at the National Gallery showcases 44 paintings of young women, some of them known by name as Corot's models. Yet these works are not polished "portraits" of individuals as Sargent did so well and Corot too, on occasion, painted.

Instead, Corot probed the shifting moods and states of mind of human beings with these works. Neither formal portraits or illustrative "types," Corot presents distinct individuals, real people. Each is an embodiment of that most amazing feature of  human life. Every person is a mystery, to themselves most of all.

Corot, on a certain level, is no mystery. He was born into a successful middle-class family in 1796, which made him too young to be marched-off as cannon fodder in Napoleon's wars. As a young boy, he was introduced to the glories of nature in field trips led by an esteemed teacher just as Romanticism caught "fire" in France. To the chagrin of his parents, Corot proved an abysmal failure in every form of business endeavor. He had but one talent and that was for painting.

In 1824, John Constable's The Haywain was shown at the Paris Salon of that year. French painters were greatly impressed and the influence of the "British School" was extended by Richard Parkes Bonington (1802-1828). It was the sight of a watercolor by Bonington which impelled Corot toward landscape painting. This became his forte, and although he struggled at first, Corot began to sell landscapes to wealthy patrons. In 1846, to the amazement of his father, Corot received the Légion d'Honneur.

Unlike the great 1996 Corot exhibition at the Metropolitan Museum of Art, there are no landscapes in the current National Gallery show. That is not a drawback for two reasons. The National Gallery is richly endowed with Corot masterpieces. Only a few galleries from the Corot: Women exhibit, The Forest of Fontainbleau, one of Corot's greatest landscapes is on view. 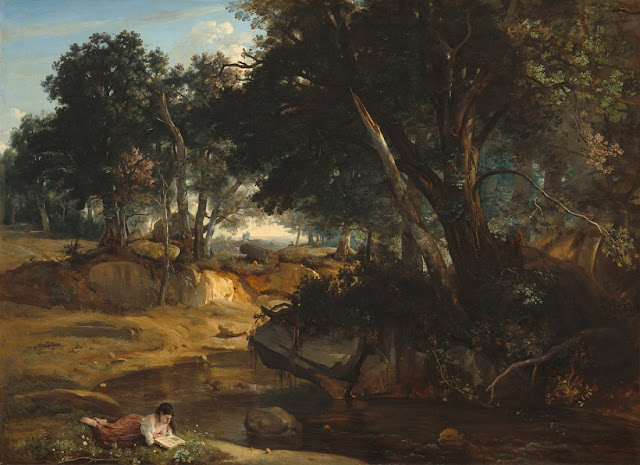 Jean-Baptiste-Camille Corot, The Forest of Fontainebleau, 1834

The second reason not to be alarmed at the absence of Corot's specialty is bit more difficult to grasp. Corot's figurative studies were a indeed a sideline to his landscape oeuvre. Corot was overheard telling a model who had inquired about a session, "Come back sometime later, my child, I can't take a vacation at the moment."

Yet, these figurative works provide a telling insight into Corot's character - and of all great artists - namely the desire to go beyond what has been achieved, to probe the unknown and the unknowable.

Corot's Woman with a Pearl (which introduces this review) is a case in point. The parallels with Mona Lisa are obvious but actually superficial. Leonardo's immortal work was a lot less "immortal" when Corot studied it than it is today. Mona Lisa gained its present "superstar" notoriety only after it was stolen from the Louvre shortly before World War I.

Corot's misnamed masterpiece - the model, Berthe Goldschmidt has a flower petal on her forehead, not a pearl - evokes the enigmatic persona of La Gioconda rather than her elite status in the canon of Western art.

Early on, Corot painted his female protagonists in peasant or folk attire, Italian and Greek especially. One of the first of his figurative studies, Young Italian Woman from Papigno with Her Spindle, is amazingly modern in the informal pose of the subject and the direct, focused application of paint. What must have seemed "slap-dash" in the 1820's and 30's appeals to us today as a work just a short step from genius. 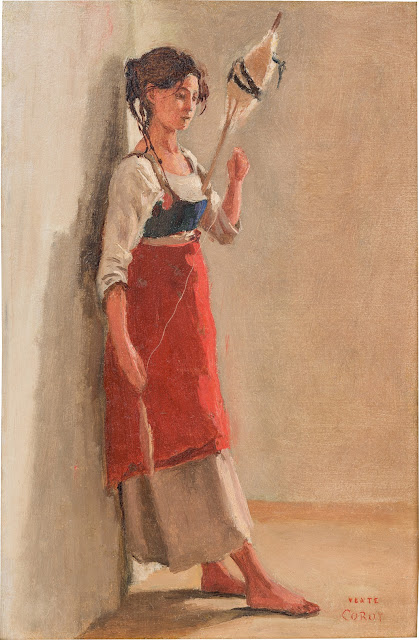 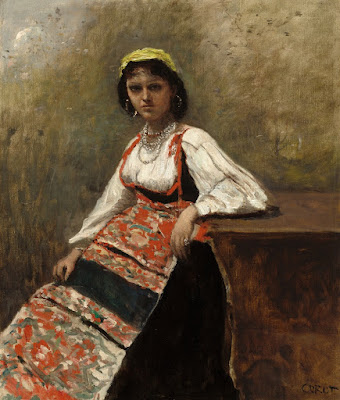 Corot began painting figurative works in earnest during the 1840's. He continued to dress his models in colorful, traditional garb. Yet these were not costume subjects, intended for sale. Corot's figurative works (including several nudes) were paintings he did for himself. Few were exhibited during his lifetime. Woman with a Pearl only gained renown - and an incorrect title - when it was shown in 1889.

Corot was aided and "abetted" in this secret pursuit by one of his favorite models, an enchanting young woman named Emma Dobigny, who also posed for Edgar Degas and other French painters of the mid-nineteenth century.

"Posed" may not be the appropriate word to describe Dobigny's role. Lively and gregarious, she could not stand still for more than a few minutes. She pranced about Corot's studio, gossiping and singing, and the old artist loved every minute of it.

“That mobility is exactly what I love about her,” Corot commented. “My goal is to express life. I need a model who moves around.”

Two paintings of Dobigny, both with Greek themes, illustrate the difficulty in fixing a "trajectory" for Corot's figurative studies. 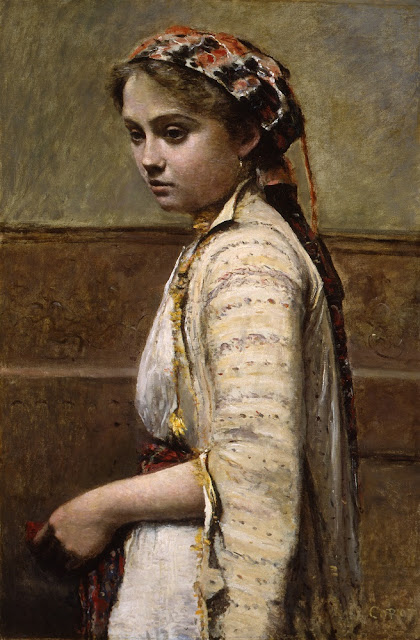 The first, Young Greek Woman, painted around 1870, is highly finished and certainly in keeping with the tastes of the mid-century 1800's.

The second is ostensibly one of a series of ancient Greek muses. You would hardly guess that there was a mythological or classical subject matter to this very modern-looking work. The thoughtful young woman in a sleeveless blouse was painted five years before Young Greek Woman. Because of the lack of finish, we cannot be absolutely certain that Emma Dobigny was the model, but it very likely was her. 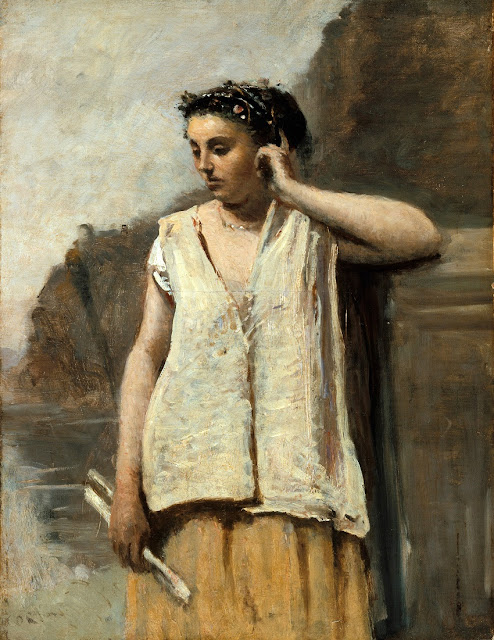 Interestingly, this "impressionistic" work was sold by the legendary art dealer of the Impressionists, Paul Durand-Ruel, to Henry Havemeyer and his wife, Louisine, in 1899. The Havemeyers, the greatest American patrons of French 19th century art, bought the first work of Claude Monet owned by collectors in the U.S. They also favored Manet, so the modern appearance of this classical subject (in name only) by Corot likely appealed to the Havemeyers' forward-looking taste in art.

It was not just daring American art collectors who were intrigued by Corot's figure studies. Artists began to take notice of the aging master's experiments. 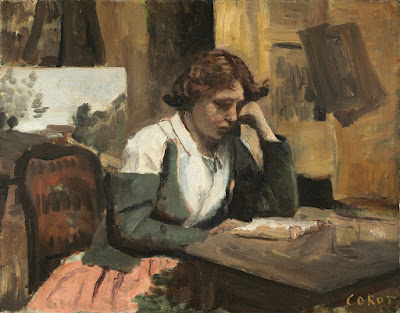 
Corot taught Berthe Morisot and her sister, Edma. Surely, the broad, almost reckless brush strokes of Corot's Woman Reading in the Studio (1868) influenced Morisot in some of her daring, dazzling displays of brush work.

The real impact of Corot's figurative studies took place after his death. The trove of paintings he kept in his studio were displayed in a number of exhibits and young revolutionaries like Braque and Picasso were impressed.

In 1909,an exhibition, Rétrospective de figures de Corot, was held on Paris. Ironically, several of the works with high finish and tradition-honored themes made the greatest impact. One of these is especially worthy of note, as it is now in a private collection and rarely displayed. Woman with a Large Toque and a Mandolin was an early figurative work by Corot, a deliberate homage to the Renaissance. 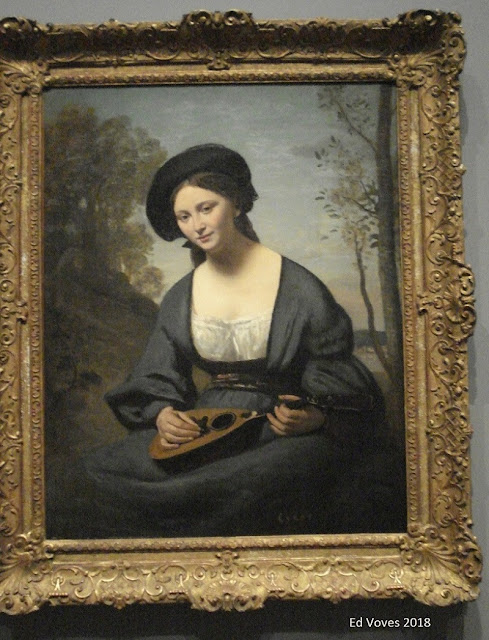 Georges Braque and Pablo Picasso took note. The two young painters had launched the Analytical phase of Cubism, where all the elements of the picture were being reduced to geometric essentials. Corot had used the musical instrument as an emotional focus point in his tribute to the Renaissance. Braque and Picasso grasped that they needed to do the same in their radically different compositions. Braque, followed by Picasso, incorporated the mandolin into Cubist works, an event of signal importance in the evolution of Modernism.

During the final decades of his long life, Corot had searched for the "essence" of his subject. In his case it was the humanity of his models which he sought to capture on canvas. “My goal is to express life," Corot proclaimed.

Despite his advanced age, Corot was "expressing life" with ever increasing energy, skill and insight. A year before he died, Corot reached the mountain top.
. 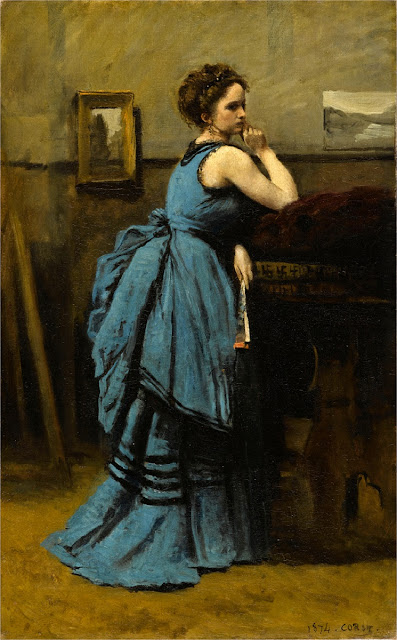 Jean-Baptiste-Camille Corot, The Lady in Blue, 1874

The National Gallery exhibition concludes with Corot's last great work, The Lady in Blue, created in 1874. This pensive woman was painted with the same vigorous brush strokes that Corot had used on the Young Italian Woman from Papigno with Her Spindle, painted nearly a half-century before.

Indeed, this astonishing work of art was as "impressionistic" as anything on display in the first Impressionist Salon held that same year. Lady in Blue, however, enjoyed the distinction of being purchased almost immediately, which was not the case of most of the works of art at the Impressionist Salon.

By 1912, when The Lady in Blue was put up for auction, the painting had acquired an almost legendary fame. The Louvre snapped it up for the hefty sum of 162,000 francs. Its true worth, however can only be computed in the words of praise which art commentators spoke of it.

Of these complimentary remarks, none was more fitting or more accurate than the assessment by art critic, Gustave Geffroy. His words, moreover, spoke for the  entire range of Corot's figurative studies, not just this final masterpiece.

"With this fleeting instant," Geffroy wrote of Lady in Blue, "Corot has created a definitive reality."

Posted by Art Eyewitness at 2:28 PM