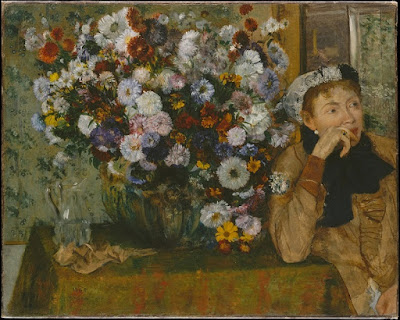 When the Museum of Modern Art in New York City announced that it would be shutting its doors from mid-June to late October 2019 for renovations and a reconfiguration of its iconic collection, I resolved to journey to NYC before the museum closed.

A lot of fellow art lovers had the same idea. MOMA was crowded almost beyond capacity on the day I visited, June 13. Certain galleries, however, were even more packed with patrons than others.

It came as no surprise that the paintings commanding such elbow-to-elbow attention were works by the 19th century Impressionists and the Post-Impressionists, the "old masters" of  modern art. 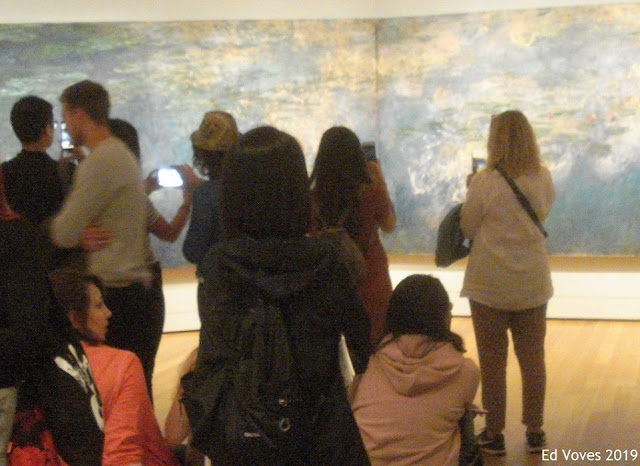 Why the continuing appeal of Monet, Renoir and Seurat? It was not always so. When MOMA first opened its doors in 1929, interest in the founding generation of modern art was at a low ebb. 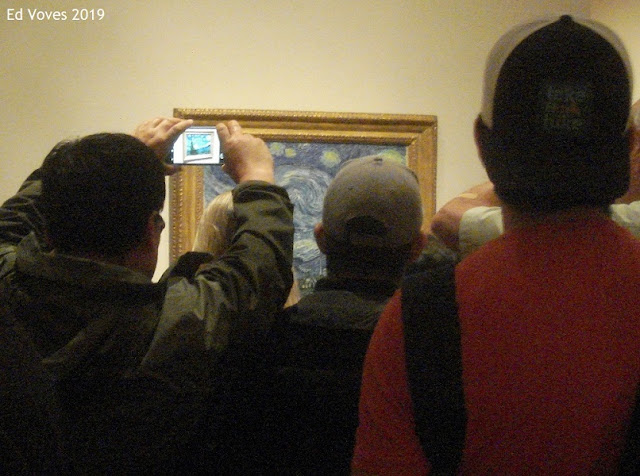 It was not until the 1950's that the popularity of the Impressionists began to thrive. The publication in 1946 of The History of Impressionism by John Rewald, still the "gold standard" book on the subject, was key to this revival. Hollywood "bio-pics" of Henri Toulouse-Lautrec (Moulin Rouge, 1952) and Vincent van Gogh (Lust for Life, 1956) also provided a huge impetus for reawakening interest in La Belle Époque. 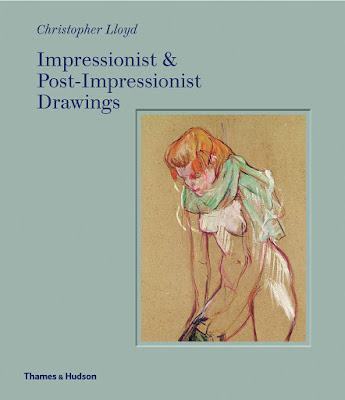 Christopher Lloyd's Impressionist & Post-Impressionist Drawings is a particularly impressive
book. From the standpoint of the research and analysis which the author devoted to this topic and the superlative quality of the narrative, this is a book to rival - and complement - Rewald's History of Impressionism.

In writing about the Impressionist and Post-Impressionists,  Lloyd does not limit himself to  considering preparatory sketches and exhibition-quality pastels. Astute commentary on the working technique of these artists is shared in short, masterful biographical portraits. 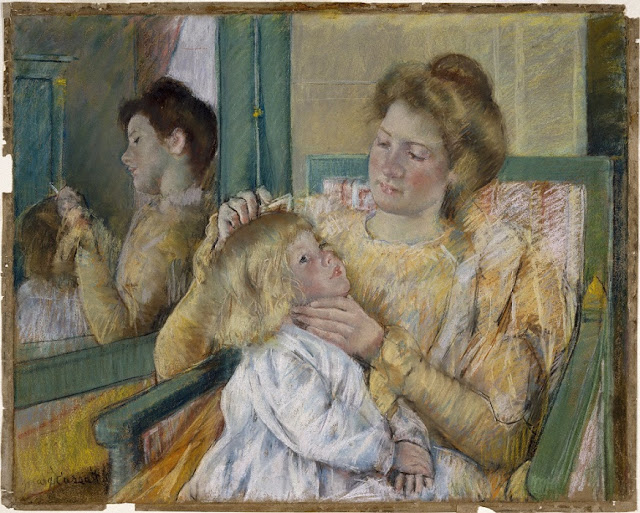 These brief character studies are models of psychological insight. Throughout the book, Lloyd uses a few, well-chosen words to create an image or prove a point which other books on Impressionism could not match in an entire chapter.

Writing about Édouard Manet, whose most controversial works were often re-workings of classic artistic themes, Lloyd writes, "Manet used the past as a Trojan horse to establish the primacy of modernism." 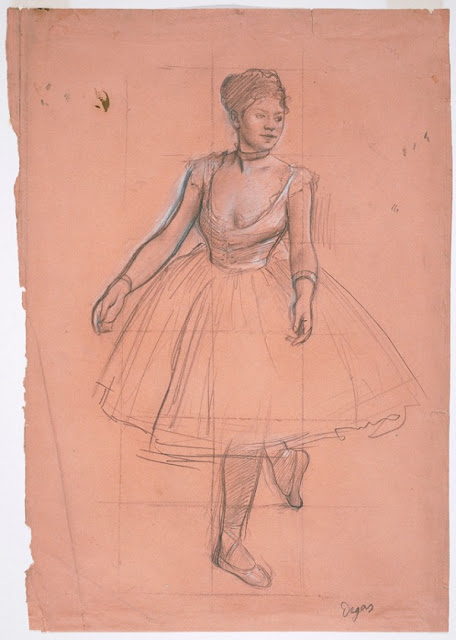 Lloyd was for many years the curator in charge of the Queen's Pictures for the Royal Collection. He is also a specialist on the career of Edgar Degas and his 2014 book, Degas: Drawings and Pastels is the definitive work on the most accomplished draftsman of all the Impressionists. His chapter on Degas is a high point of his new book, as well. Here is a more extended sample of Lloyd's marvelous prose:

Degas's art ... is based on a penetrating and intelligent investigation of society comparable with the novels of contemporary naturalist writers such as Emile Zola and Guy de Maupassant. A keen observer of ballet dancers, cabaret performers, jockeys, milliners, laundresses, ironers and prostitutes, Degas became respectful of the skills of others and the demands made upon them, to the extent that in the wider sense the challenges they faced can be interpreted as a metaphor for the struggles he had in perfecting his own art. In his depiction of everyday modern life, therefore, Degas sought out the heroic amid the mundane and the universal amid the incidental.

Here we see art history raised to a transcendental plain of human - and humane - commentary.

In purely artistic terms, Lloyd shows that the famous Impressionist technique of painting directly from nature was only one of the "arrows" in their quiver. Almost all of the Impressionists and Post-Impressionists utilized preparatory drawings from time-to-time, as we can see in this sketch by Renoir for The Dance in the Country (1883). 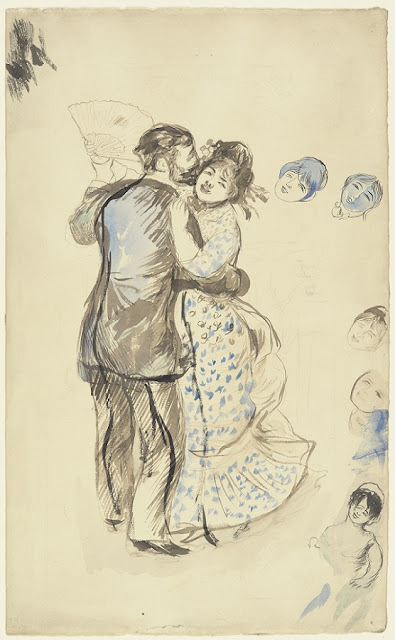 Pierre Auguste Renoir, Study for The Dance in the Country, 1883

Lloyd, of course, is not alone in pointing out that the Impressionists did not always paint sur le motif. This year's premier Impressionist exhibition, The Impressionist's Eye at the Philadelphia Museum of Art, underscored the often methodical attention devoted to drawing. Lloyd, however goes one step further by including the Italian-born artist, Federico Zandomeneghi (1841-1917) as one of the Impressionist artists skillful in drawing. As the illustrations of his work displayed in the book testify, Zandomeneghi was a maestro with pastel chalk. 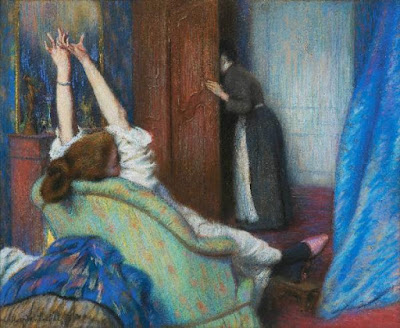 Zandomeneghi was a latecomer to Impressionism, exhibiting at the 1880 Salon. Before this, he was a member of the Macchiaioli art circle, based in Florence. "Macchia" means splash, used in reference to their brush technique, which was similar to that of their French contemporaries.

The Macchiaioli, in fact, were a parallel avant-garde movement astonishingly akin to the Impressionists. Lloyd is right on target when he notes that Zandomeneghi had only to leave the Macchiaioli's meeting place in Florence for its Impressionist counterpart, "on coming to Paris Zandomeneghi was exchanging the Caffe Michelangioli for the Cafe de la Nouvelle-Athenes on the Place Pigalle..."

Such reflections raise the rather subversive question of why there are so many exhibitions devoted to the Impressionists and so few to the Macchiaioli. According to my research, the last major exhibit of Macchiaioli paintings in the English-speaking world was held in 1986 at the art museums of UCLA and Harvard. Until this omission is corrected, we at least have Lloyd's spirited chapter on Zandomeneghi to remind us of the Macchiaioli.

Impressionism was never limited to one nation, though of course, France and French painters had the starring role in the crucial early years. Ralph Skea, in the second of the books under review, emphasizes the international character of Impressionism in his splendid volume of Thames & Hudson's Art Essentials series. 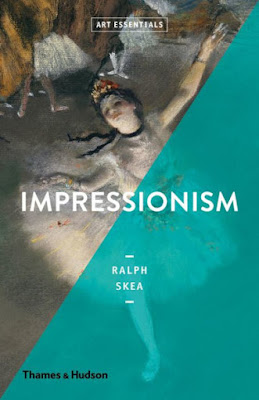 Skea,an artist himself, pays special attention to the American and Australian Impressionist painters, some of whom required quite a bit of convincing before joining the movement.
Examining the career of J. Alden Weir (1852-1919), Skea notes that Weir encountered Impressionist paintings while studying in France, finding them "to be unprofessional, lacking in correct drawing and composition."

After returning to the United States, Weir experienced a change of heart. He joined John Henry Twachtman (1853-1902) and Theodore Robinson (1852-1896) at the Cos Cob art colony in New England. Weir's The Red Bridge (1895) is one of the greatest of American Impressionist paintings. 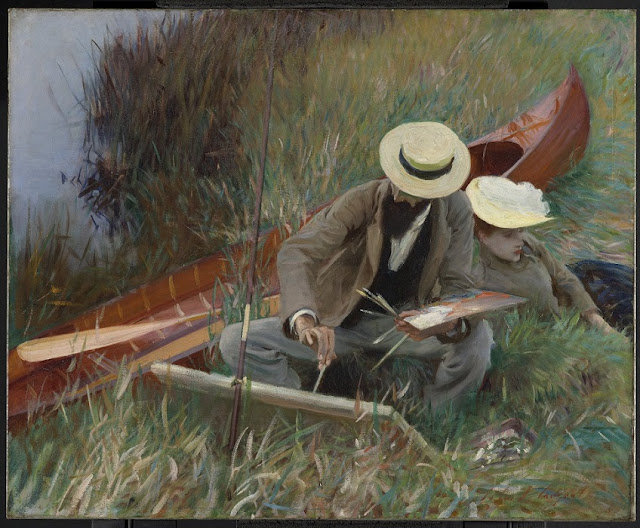 American Impressionism had special challenges which kept it from achieving the special status it deserved. Two of its most gifted practitioners, Twachtman and Robinson, died tragically young. The most gifted American artist of the era, John Singer Sargent, painted an wide-ranging body of Impressionist works, in oil and watercolor, but became side-tracked by his grandiose mural series for the Boston Public Library. By the time the American - and Australian - Impressionists were hitting their stride, new developments in art had pushed Impressionism away from the vanguard of Modernism.

Skea skillfully incorporates this American episode within the overall saga of Impressionism, all within 176 pages. He recounts the rise and enduring appeal of the Impressionism in an engaging, thoughtful way which will appeal to readers new to the Impressionist's story and rewarding to art lovers who have read Rewald's classic account.

Skea's Impressionism is remarkable both for its concision and the way that unfamiliar artists or little known facts are introduced without affecting the thrust of the narrative. For instance, Skea notes that one of the lesser-known members of the movement, Armand Guillaumin, was one of the first to "to include factory chimneys as a major feature, showing the visual impact of recent industrialization." 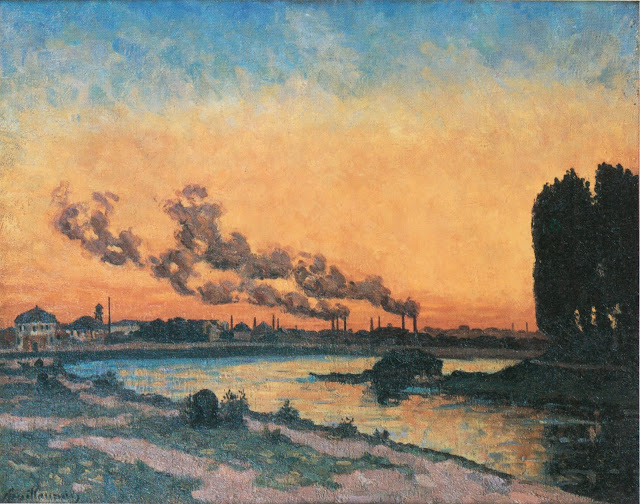 Skea makes a bold comparison between Guillaumin's Sunset at Ivry with another Impressionist painting which had been displayed at the first Impressionist Salon in 1874. This was none other than Monet's signature work which was to give the movement its name: Impression: Sunrise.

Skea writes:
Guillaumin's dramatic representation of a sunset is in many ways a companion picture to Monet's more famous and more abbreviated "impression" of a sunrise. Both images brought to the exhibition the Impressionist commitment to painting light by means of heightened colour effects. 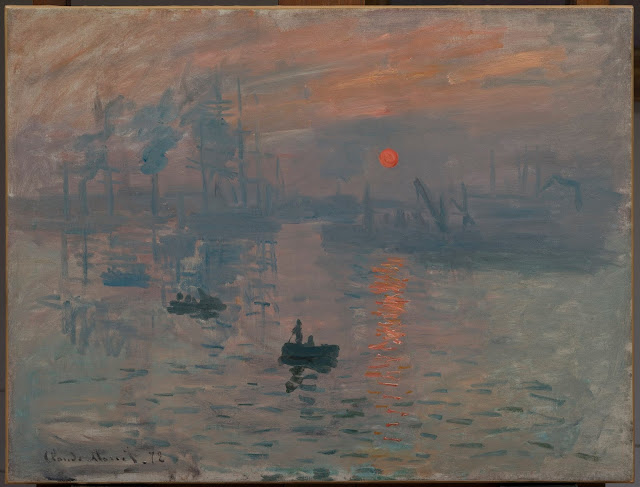 Taken together, Impressionist & Post-Impressionist Drawings by Christopher Lloyd and Impressionism by Ralph Skea prove their points. The Impressionists did indeed make carefully composed drawings as part of their oeuvre. Despite the harsh, derisive criticism hurled at them during the early years of the movement, the Impressionists' novel handling of light and their depiction of social themes changed the trajectory of art forever.

How like the sunrises and sunsets they painted are the pictures of Monet and his colleagues! One never fails to see the Sun break through the mists of dawn or sink below the horizon in a veil of fading glory without feeling a sense of awe, a renewed belief that the living spirit of the cosmos will triumph and endure. So too, for the art of the Impressionists.

Posted by Art Eyewitness at 3:02 AM