Paris, Capital of Fashion at the Museum of the Fashion Institute of Technology in New York City 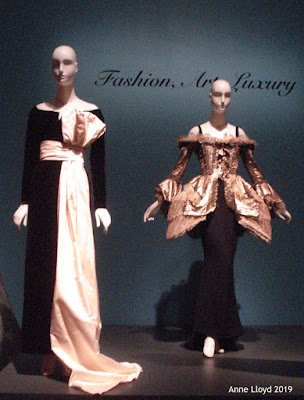 Museum of the Fashion Institute of Technology
September 6, 2019 - January

The word "fashion" connotes change.  This is true for clothing - and for just about everything else. "New Look" was a great slogan for the post-World War II revolution in style. But the elegance of a robe à la française from the 1700's or the stylish simplicity of a Chanel "little black dress" can re-emerge in new fashion designs at any time. Creativity in haute couture is timeless yet radical, visionary while also being nostalgic.

“Might it be possible to awaken the clothes of long-gone eras and infuse them with the spirit of today?”

Nicolas Ghesquière raised that issue with his Spring/Summer 2018 collection for Louis Vuitton. Paris, Capital of Fashion, a major exhibition at the Museum of the Fashion Institute of Technology in New York City, seconds the motion.

Ghesquière replied to his own question with an eclectic mix of brocade frock coats, straight out of the Ancien Regime, matched with silk running shorts. If the result bordered more on children's dress-up than serious fashion, the answer is still yes!

Paris, Capital of Fashion is a brilliantly orchestrated exhibition, displaying over one hundred stunning dresses and accessories, an homage to the court of Versailles and a large-format photo of Garment District workers "schelepping" racks of dresses to the show room in 1955. 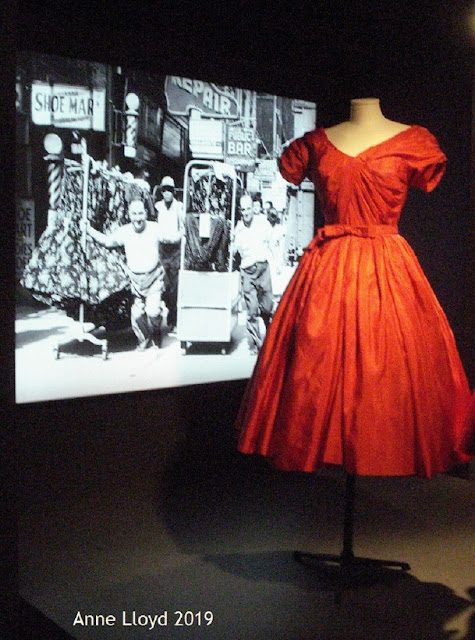 Valerie Steele, the director and chief curator of the Museum of the Fashion Institute of Technology, organized Paris, Capital of Fashion in general chronological order. There are, however, numerous compare/contrast displays complementing the basic timeline. A good example of this is the juxtaposition of John Galliano's embroidered faille dress with underskirt and metal front piece, 2000-2001, posed next to an authentic robe à la française, dated 1755-1760. 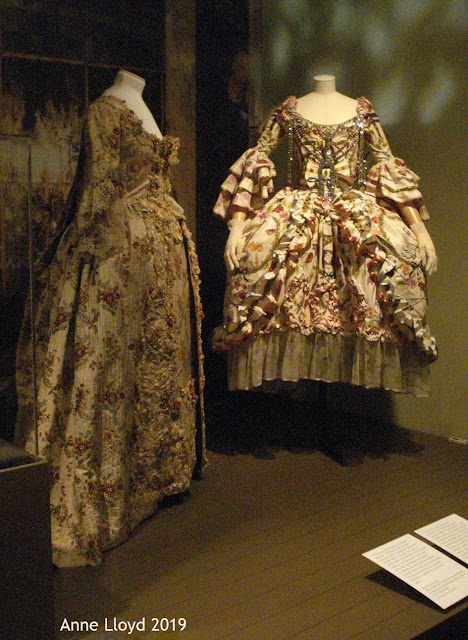 Rather menacingly, Galliano placed two portraits of Marie Antoinette on the billowing skirts of the dress he designed, one showing her as the shepherdess of the Trianon while on the other side she wears the bonnet rouge of the Revolutionary tribunal who sentenced her to death in 1793.

Galliano's pointed reference to Marie Antoinette's encounter with Madame Guillotine is not an isolated vignette in the exhibition. As we will discuss, Paris, Capital of Fashion offers serious reflection on the interaction of clothing styles and the historical eras in which they were made and worn.

Such revealing insights in no way inhibit our appreciation of this marvelous, indeed radiant, display of some of the most beautiful dresses ever made. Whether you are a scholar of clothing design, a "fashionista" or an eclectic lover of art exhibitions, Paris, Capital of Fashion is a must-see exhibit and one which will be remembered for a very long time. 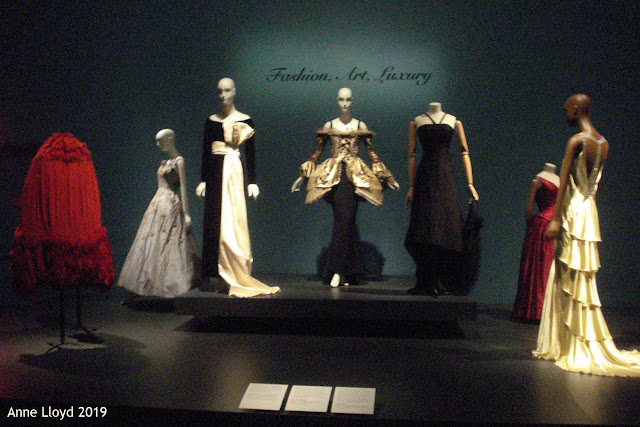 
With so much to see and admire, this is an exhibition which needs a visually stunning focus point - and it has one! A spectacular "runway" like display features sensational twentieth century haute couture under the heading: Fashion, Art, Luxury.

Had Paris, Capital of Fashion been limited merely to this central gallery, it would have still been a outstanding exhibition. Such is the "show-stopper" quality of each of these dresses. The Chanel cape and the shimmering Agnès-Drecoll evening dress vividly bring to life the elegant sensuality of Paris between the World Wars. 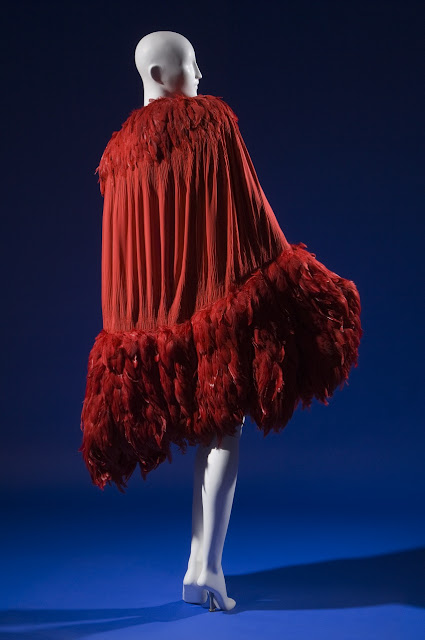 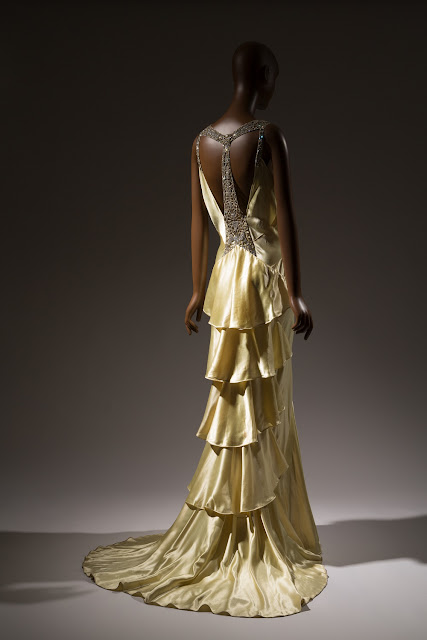 While our eyes may linger on these superlative examples of haute couture, some of the less striking dresses and men's suits provide fascinating insights into how the "times" influenced the clothes people wore. The fashion trend-setters in Revolutionary France following the years of terror, 1793-95, wore such bizarre, outlandish attire that they were deemed incredible - incroyable - if they were men, and merveleuse if they were women. Following the French Revolution and the plumes, gold braid and gore of the Napoleonic Wars, fashion assumed a more much sensible and quietly elegant style.

This trend is reflected in a printed linen dress, c. 1837, the era of Charlotte Brontë in literature. This beautiful dress is also noteworthy for its printed motif. Almost all clothing, for rich and poor, continued to be created by hand in small shops during the first decades of the nineteenth century. But factory-printed fabric was already appearing, pointing to the divide later in the century between mass-produced "reach-me-down" clothes for the working class and haute couture (which means higher sewing) for the more well-to-do.

It was a Victorian Englishman, Frederick Charles Worth (1825-1895), who really made Paris the global fashion capital it remains to this day. Worth created the basic designs of dresses, using a well-integrated force of skilled workers to do the sewing and lavish decoration. This enabled prices to be kept within range of the newly prosperous middle class of France during the Second Empire, 1852-1870, and affluent Americans following the end of the U.S. Civil War in 1865.

Taking a tour of Europe required a mandatory visit to Paris. Worth was particularly skillful in encouraging American clients to return home with at least one "Worth" like this gorgeous blue day dress, dating to 1865-1866. 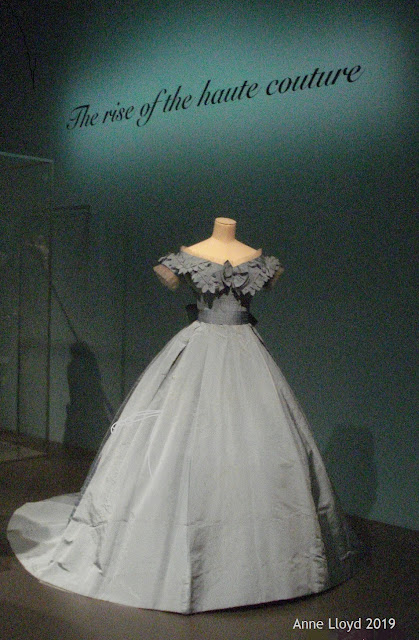 The 1920's saw another shift in style, with a more relaxed, comfortable feel in French women's attire. Gone were the restrictive "hobble" skirts and frumpy dresses of the World War I years. On view is a stylish, free-flowing day dress from the House of Chanel, in the same daring red of the 1927 Chanel cape, and an ensemble of high-end, factory-made leisure attire, just the right thing to wear to the 1928 Olympic Games in Paris. 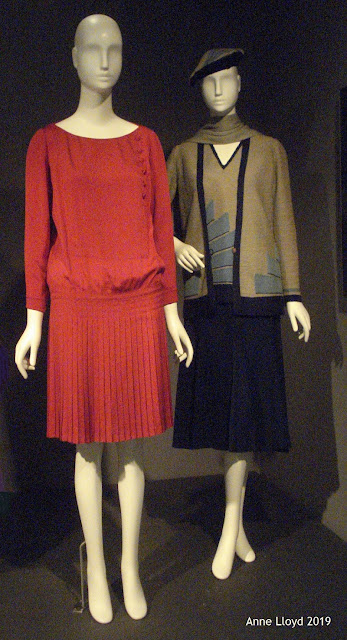 Paris, Capital of Fashion pays a great deal of well-deserved attention to Christian Dior (1905-1957). Dior revived the French fashion industry during the 1950's with the New Look in the same way that General, later President, Charles de Gaulle helped France regain a measure of its political power following the years of World War II defeat and privation. 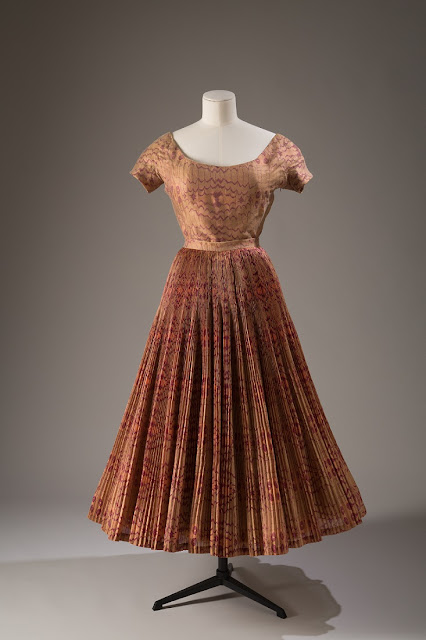 Dior's lavish use of fabric, seen in the dress above, recalled the Second Empire dress of the House of Worth. This shimmering, silk gauze two-piece dress, was worn by the celebrated actress Lauren Bacall, who presented it to the FIT.

Dior's influence was vast, especially with his idea of themed-fashion collections. Sadly, he died from a heart attack at the height of his powers in 1957.

The French have not maintained their commanding position as the arbiters of fashion without competition. The FIT exhibition pays a detailed look at the fabled 1973 "Battle of Versailles." Five American designers, Bill Blass, Stephen Burrows. Oscar de la Renta, Halston and Anne Klein, took-on the best couturiers of France, including Yves Saint Laurent, and won. 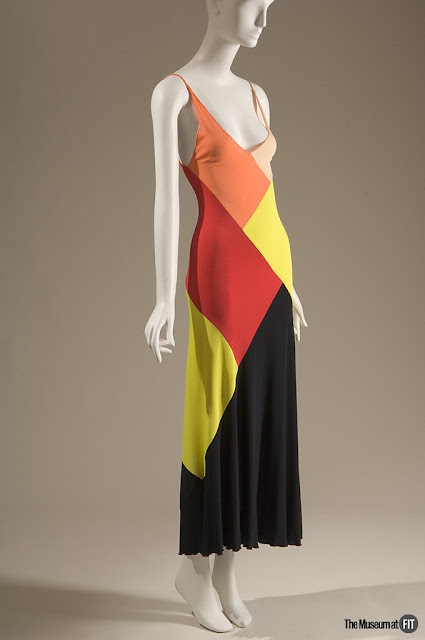 This surprising defeat did not curtail France's dominant position. Rather, it revitalized the realm of haute couture, with the eyes of the world still focused on Paris.

The FIT exhibition is epic in scope, though never exhausting. 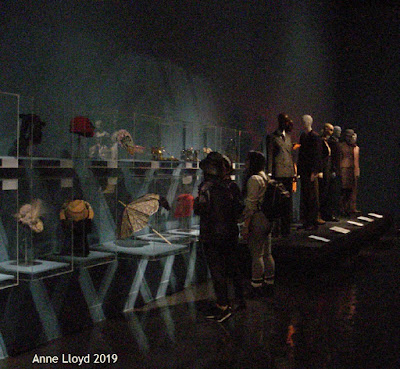 Hats, shoes, accessories are all examined in loving detail and due credit is given to French designers who have attempted to compete with the longstanding British domination of men's fashion. 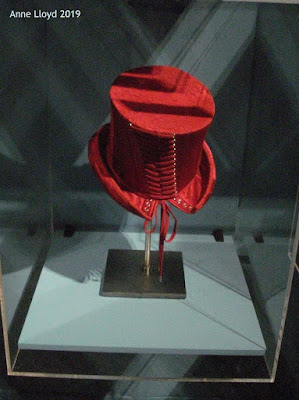 A principal reason why Paris, Capital of Fashion is such a sustained delight is the thoughtful and beautifully written wall texts and display captions. Valerie Steele is a superb literary stylist, making the exhibition an adventure for the mind. The following excerpt is indicative of Steele's command of words, as well as images:

The figure of the Parisienne had long been an icon of fashionable and seductive femininity, but by the later 19th century Paris itself was increasingly perceived as a feminized and sexualized city, a dream world of pleasure, in contrast to cities like London and New York, which seemed masculine and work-oriented. In her song “That’s Paris,” Mistinguette characterizes the city as a woman, “a blonde” and “queen of the world.”

As noted above, the exhibition does not shy away from controversy. 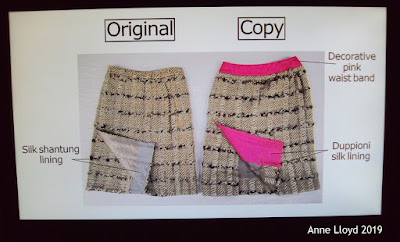 Among the hard-hitting topics examined are the piracy of French designs by foreign clothing manufacturers, including Americans, and the collaboration of French fashion houses and companies with the Nazis during the German occupation of France,1940-1944. This was not entirely a craven or self-serving act by top designers for they saved over 20,000 French women, workers in the fashion industry, from being deported as laborers for the Third Reich. 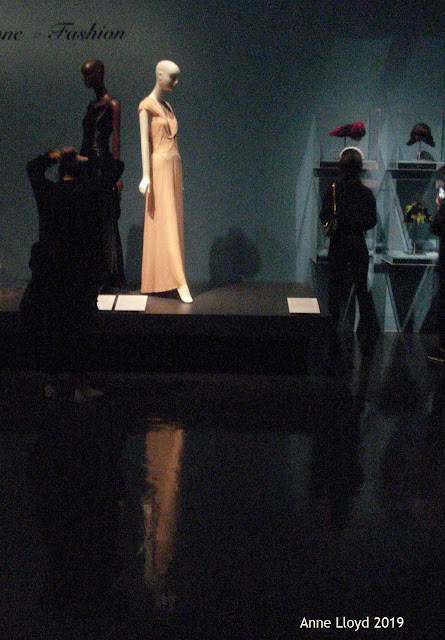 Anne Lloyd, Photo (2019)
Gallery view of the Paris, Capital of Fashion exhibition at The Museum at FIT

A banquet for the eye and food-for-thought to stimulate the intellect, the FIT exhibition is truly one of the outstanding art events of 2019. Rather than pile on further "superlatives" - however well-deserved - it is more appropriate to conclude this review with another quote from the exhibition wall texts:

In her Lettres Parisiennes (1844), Madame de Girardin referred to Paris as “this city of perfected elegance and marvelous luxury.”

Anne Lloyd, Photo (2019) Gallery view of the Paris, Capital of Fashion exhibition at The Museum at FIT.

Posted by Art Eyewitness at 6:53 PM